Defend America against the foreign invaders

Following the huge success of last year’s XCOM: Enemy Unknown comes The Bureau: XCOM Declassified, the latest entry to the now revitalized franchise. Developer 2K Marin is bringing us an origin story set at the start of the alien invasion upon Earth, and unlike past XCOM titles, this one is presented through a third-person view.

Don’t let the perspective change fool you though. XCOM at its heart has always, and will always, be about strategy; going around acting like a wreckless soldier in The Bureau will get you killed pretty quickly. Strategy is crucial, and you need to play smart if you hope to save the United States of America from the threat of alien enslavement.

The Bureau is the never-before-told origin story of the XCOM organization. It was originally established to protect the US from foreign threats like the Soviet Union in the 1960s. But things quickly changed because of the alien invaders.

“One of the goals for the setting period is we’re trying to get that juxtaposition of the America that we knew going into the ’60s, leaving the idyllic ’50s, and heading into a time of change,” creative director Morgan Gray told us. “A lot of threat, the scare from the Soviet Union with their bombs pointed towards us, we’re just past the Bay of Pigs, Vietnam lurks in the horizon. [We’re] contrasting that known tension period of our history with the tension we never realized before, which is, aliens come in and attack and shake it all up.” 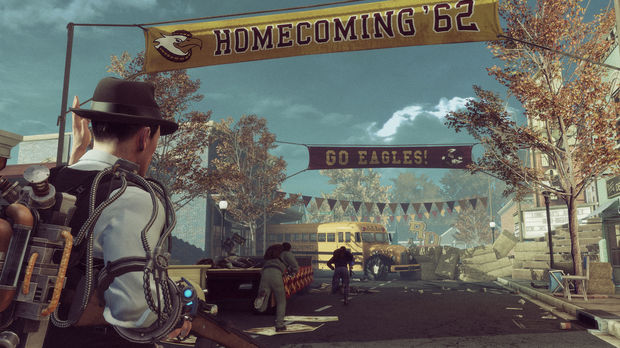 You play as Agent William Carter, and as Carter you’ll be making a lot of choices. A lot of the game centers around your special underground headquarters, where you’ll be deciding what missions to take on, managing your agents, and seeing how the war against the aliens is progressing. The HQ features a big map of America that displays numerous current known alien conflicts. The campaign structure is semi-nonlinear, as opposed to your typical level-cutscene-level flowchart, meaning you actually get to choose where to go. There are the operation missions that form the main narrative, optional side missions, and the Dispatch missions, which I’ll get to in a bit.

Agent Carter is never on his own, as you’ll always have a team of agents to back you up. These agents are fully upgradable, can specialize in different fields (engineer, sniper, etc.), and are fully customizable. Decide what kind of gear they’ll have, what weapons they’ll use, what skills they’ll learn, even what clothing they’ll wear. And they will actually die if you don’t manage them properly in the field — yes, there is permadeath, and the loss of someone is meant to be significant. Things will get pretty tough further into the game if you don’t have properly leveled agents on your team.

You have a max number of eight agents at all times, two that can go with you on missions and the other six benched at home. You can swap out agents at certain checkpoints during missions, so long as they’re at home base, of course. See, while you’re on main missions you can send other agents on Dispatch missions, where they’ll be taking care of alien threats and leveling up on their own. It’s a lot like Metal Gear Solid: Peace Walker‘s Outer Ops missions, except here micro-managing your soldiers will actually benefit you since they can come with you on outings. 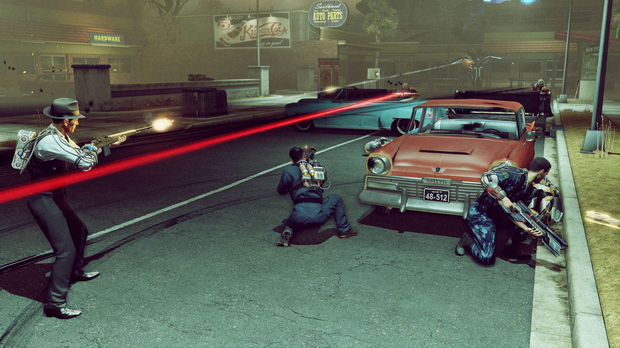 Thankfully there’s an assortment of alien tech at your disposal to stand a chance against the aliens. You’ll gain cool special abilities thanks to your upgradable and interchangeable backpacks. One grants a pulse wave attack that knocks back enemies, and another lets you lift up a specific enemy into the air for a few minutes — that one in particular is good for taking out stronger soldiers. Other backpacks provide health increase, shielding, experience booster, damage output increase, and more.

Once familiarized with my team, I jump into the mission demo, which takes place somewhere in the middle of the story. The US is now mounting a counter offensive against the invading forces, and this mission saw my team and I needing to meetup with another XCOM member, Agent DaSilva. He was sent out on an operation himself, but contact was lost and you need to go find out what happened.

The mission takes place in New Mexico, and on your way via helicopter, you can see a giant alien tower in the distance that you need to enter with DaSilva’s help. Also on your ride in, you also see humans infected with the Sleep Walker, which basically turns them into mindless drones that are stuck in a loop where they keep repeating the same patterns, like a scratched CD that won’t stop skipping. The virus also allows the aliens to turn humans into sleeper agents whenever needed, making infected humans a threat. 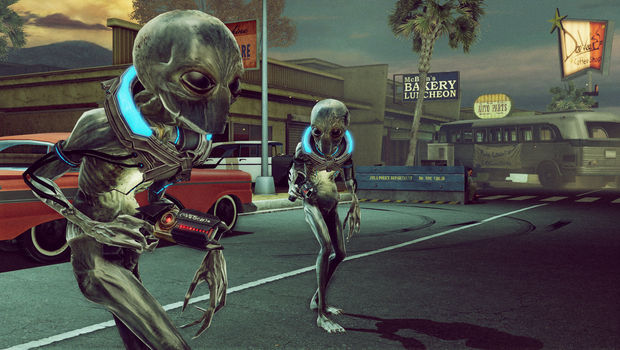 So who are the aliens exactly? They’re called the Outsiders, humanoid-like aliens on a quest to conquer the galaxy. So far they’ve taken over quite a few alien races, like the Sectoids and Mutons from past XCOM games. Other races have been given slave collars wrapped around their necks, and they have no choice but to obey the Outsiders.

Once on the ground, it became immediately apparent how crucial using tactics was. Running straight into a conflict head-on will almost instantly cause you to bleed out, and you’ll eventually die if not healed in time. You need to use cover and most of all Battle Focus to maneuver your team around like the master strategist you are.

Once you trigger Battle Focus, the action slows to a crawl and the camera can be moved around freely, allowing you to look at the entire combat area to decide what to do. From here you can decide where to move your men, tell them to flank positions, lure enemies from cover, determine who to attack, throw down mines, place laser turrets — you have full control over what they’ll do on the field. 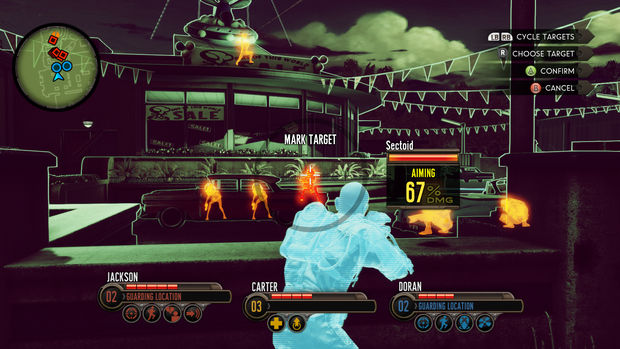 It’s super easy using the Battle Focus commands. Each agent has a command wheel that pops up so you can easily choose what they’ll do, then you just fly around the map and select what happens where. While the action is crawling, there’s still some level of tension at play. Things are still happening, and you have to make decisions on the fly lest you or your teammates die. You also have some quick command actions tied to the D-pad so you can tell your teammates to move/attack a specific object or to regroup without having to jump into Battle Focus.

One of the bigger battles has a great mix of aliens. Outsiders are shooting back from a safe distance, supported by their own Commander that could summon in protective barriers. At the same time, the Sectoids are advancing the field, while the black goo creature that we’ve seen from the earlier versions of 2K Marin’s XCOM are coming right at us like crazed attack dogs. To add icing to the cake, a Muton gets summoned in last before the battle was finally over, and it is in that calm I finally remembered to breathe. 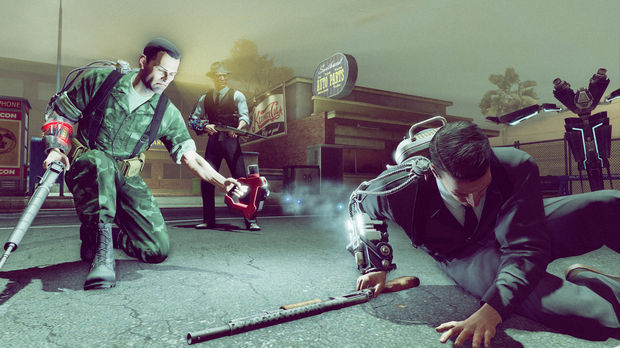 With The Bureau, you are right there in the heart of the battle with your men, as opposed to being this God-like figure that’s removed from the battlefield. “We’ve taken a look at the XCOM franchise and we looked at what we consider the pillars of the franchise,” Morgan stated, “which for us is team tactics, tools, technology, terror, tension — there’s a lot of Ts that all fall into that.

“Obviously looking at 1994’s original XCOM, we wanted to find that translation of that game. How would that translate into something that would possibly bring a new audience into the XCOM family, let them experience XCOM in a way that fans have never seen it before, or new people who might be of the mind that they don’t like turn-based games — and they’re wrong because turn-based games rock — would finally go, ‘Well that’s something I’m into, I like the thought of using cover, I like having to make decisions on the fly as the bullets go’?

“So our goal was to go, what is that core of that XCOM experience, how does it translate into this new perspective? We wanted to move beyond the ‘I have a God’s eye view, I’m looking at my squad below, and I am personally removed from the damage’ and now to ‘I’m a coach, I’m on the field with my men.'”

After a few encounters, my team and I meet up with DaSilva and things aren’t looking good for him. His squad was wiped out and he’s been infected with the Sleepwalker virus. There’s a dialogue tree allowing you to grill him about what’s happened, and eventually you’ll come to a point where you have to make a decision. DaSilva offers himself up as a distraction against the Outsiders, which will in all likelihood get him killed, so you and the team can enter the alien base. You can either let him come along or send him back to HQ so the boys at home can research a cure for the Sleepwalker Virus.

There will be choices you have to make, some that will have immediate effects and others that will affect the storyline. In this case, I choose to send DaSilve back to HQ, thus finding a cure for the virus and saving infected humans.

Our hands-on time was short, but I didn’t need long to tell that I really liked The Bureau. I love the mix of being right there in the action, and at the same time needing to be quick on my feet making decisions on the fly. There’s a sense of urgency that you feel from having to make decisions while there’s terror coming from you in every direction. There’s stress, sure, but there’s also instant gratification once you’ve won an encounter, and that’s exactly what I enjoy when it comes to strategy games.