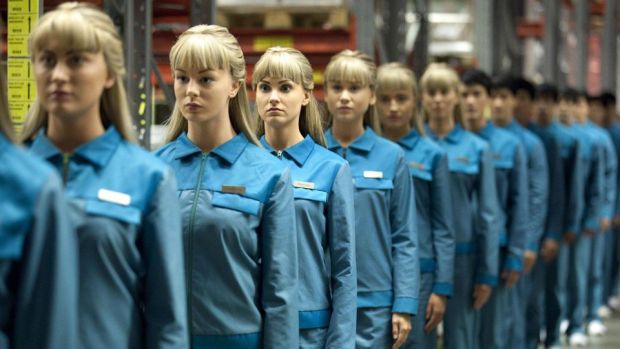 Plus a preview of some of the original programming

Xbox Originals is going to produce shows based on Microsoft IPs such as State of Decay, Halo, and more, along with producing all sorts of other original content. I have some very early impressions on a lot of the content in development below, but before that let’s talk about how this content will be viewable by consumers.

All the content will for sure appear on the Xbox One and Xbox 360, along with Microsoft’s family of products such as its Windows 8 Phones, Windows 8 PC, and Surface tablets. Microsoft is working with an assortment of partners to make all of this content, and certain ones may want broader distribution options. In case like that, we can expect some sort of timed exclusives with the content before it appears elsewhere.

The same goes for different revenue streams, which will vary by project to project depending on the studio partners.

“We haven’t set anything in stone yet, president of entertainment and digital media Nancy Tellem told Destructoid. “I think it will depend upon the content that we have. There’s a priority to make sure that the Xbox Live service and what people are paying for that there’s a real value proposition and value to them paying these subscriber fees.

“There are also others that we’re debating actually to put in front of the paywall and that would be subsidized in a different way, but again having people exposed to the content and what we have to offer in order to give them more insight at what would be a real value to the Xbox Live subscriber. We’re trying to figure out which makes the most sense, how it’s tied with other things … and we’re also trying to figure out from an economic model makes the most sense.”

Microsoft showed us some early trailers of all the projects they have in development right now, and here’s information and some impressions of what I saw.

This is a six-documentary series that will explore how technology is changing our world. For example, one of the movies will examine how the creation of the MP3 would go on to give rise to the illegal drug trading website Silk Road. To start it off however, we’ll be getting a documentary on the fall of the Atari corporation, featuring them digging up the legendary E.T. Atari game burial site (which just went down this past weekend). How they think this fits the theme of changing our world I have no idea.

This is a series focusing on the global search for the best street soccer players in the world, and then bringing the best of the best to compete in a four-on-four street game of soccer in the shadow of the World Cup in Rio de Janerio.

Seems like a cute series. Giving people the chance to compete in something like this who gave up on the dream of ever playing in major league soccer.

This stars Paul de Gelder, an Australian Navy bomb clearance diver who lost an arm and a leg in a shark attack. Instead of giving up on life, he overcame his odds and is creating this series following people who risk their lives in their jobs, such as working with authorities that hunt down/fight back against poachers in Africa.

At one point in the trailer Paul goes back into the water and swims with great white sharks. He even hand feeds a shark himself. Now that’s truly living up to the show name.

It’s a series based on the Swedish TV series Real Humans. The series sees humans using advanced robots as servants, until one day something happens and they start developing real personalities because that cliché hasn’t been done to death.

This is more a live event than a show, but it’s still going to see some heavy production value. Microsoft will be live at the three-day music festival starting on June 13 that features over 150 musical acts, and sees over 100,000 people attended. Viewers will be able to pick the stages they want to view for the concerts, pick from different camera angles, and even interact with music performers over Skype if they get lucky.

Jash in the Box:

This is a comedy collective founded by Sarah Silverman, Michael Cera, Tim and Eric, and Reggie Watts. The show itself will variety series hosted by comedians where they are showcasing undiscovered people they think are funny through sketches, short films, and live sets.

This is a show where live-action is crossed with stop motion animation to create an improv “comedy” show where three medieval characters are transported to modern day Los Angeles and have to find the magic mushroom to get back to their own time.

It was just horrible to watch, absolute garbage. Think Mega64 where it’s these three stop-motion characters messing with actual people on the streets. Just, you know, not funny. At all.

That’s all we were shown at this point, but it was also mentioned they’re adapting series based on the graphic novels Winterworld and Gun Machine, plus a series based on the Deadlands RPG. All these shows are in development, and will be released at various points over the next couple of years.