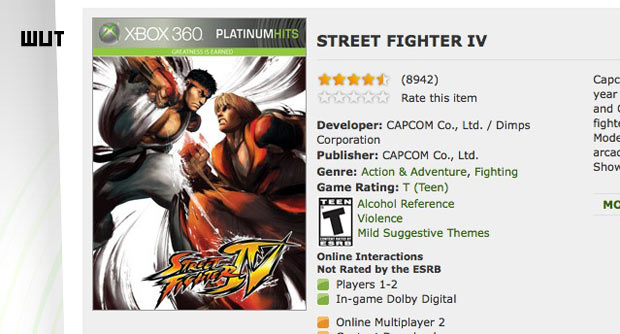 We spotted a tweet from Mister Jared Rea just a while ago, saying that Street Fighter IV had started showing up on Xbox Live as a Platinum Hits title. A quick trip over to the game’s page on Xbox.com, and sure enough, there it is.

What’s this mean? Well, it probably means just what I said. Do try to pay attention. Looks like Street Fighter IV is, or is about to be, added to the Xbox 360’s list of Platinum Hits titles. That will mean its price will be dropped to reflect this new status as well. Not exactly surprising in light of all the Super SFIV buzz this week, but nice to see, nonetheless. Looks like Capcom hasn’t wasted any time in doing the right thing here.

Just how much of a discount it will get, however, remains to be seen. Still no official word from Capcom on any of this yet, but we’ll keep you posted.