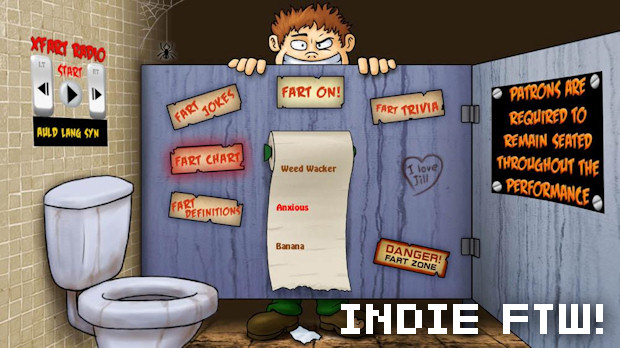 Everybody knows that being indie is incredibly cool, and Microsoft has jumped on the bandwagon by rebranding its XNA Community Games channel as Xbox Live Indie Games. That makes the downloadable clocks and fireplaces seem so much more credible, right?

Microsoft is hoping that the name change will “increase understanding and discoverability” of games. It should certainly make the channel’s aim more clear to the average Xbox 360 user, and is a far more memorable and striking moniker for the channel. There are some great little XNA games out there and it would be great if this update helps them get found. We’ll have to wait and see, though.

Indie Games is definitely fitting, as the XNA channel represents what independent gaming is all about — a few amazing little gems, hidden amongst masses of crap from bedroom developers who don’t know what they’re doing. The suitable rebranding of the channel will launch in July.

You spoke and we listened! We’ve added a number of new and improved features to XNA Game Studio 3.1 enabling hobbyists, academics, and independent game developers to easily create video games for Xbox 360, Windows, and Zune digital media players by using optimized cross-platform gaming libraries based on the .NET Framework in the C# programming language. This release is incremental to Game Studio 3.0 and contains many new and improved features:

Submitting 3.1 Games
XNA Game Studio 3.1 games can be submitted to Xbox LIVE Community Games starting late July.  Please note! Currently, if Premium Creators want to submit or service their game to Playtest and/or Peer Review, those games must remain XNA Game Studio 3.0 projects. On July 23rd, you can submit games upgraded or created as 3.1 projects to playtest and/or Peer Review, but they will not go live to consumers until we are able to upgrade Xbox LIVE Community Games Marketplace later this Summer.

Name Change
We’ve got one last surprise for you today! Savvy Creators that carefully read the documentation for XNA Game Studio 3.1 will note one big change we’re making in direct response to your feedback. The launch of XNA Game Studio 3.1 begins the process of renaming Xbox LIVE Community Games to Xbox LIVE Indie Games. We’re starting the communication about this transition with you – our incredible Creators. With your help hopefully this name change (along with other new features such as User Ratings!) will increase understanding and discoverability of your games! Late July, when we update Creators Club Online, we will begin revealing the name change to the Consumer side of our business. We believe this name better represents the independent spirit of XNA Game Studio gaming and creations!