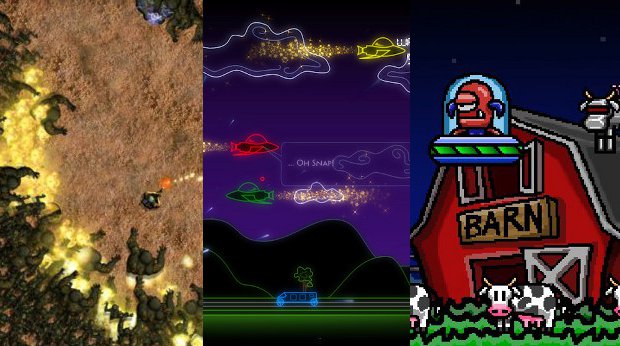 Each week on Saturday Morning Hangover, Jordan Devore and I play through the demos for the week’s Xbox Live Indie Games releases. It’s partly for comic relief but there are also quality games being released on the platform and I like drawing attention to that fact.

This week, we had three games that I recommend you take a look at. Here’s a rundown of the best the service had to offer. 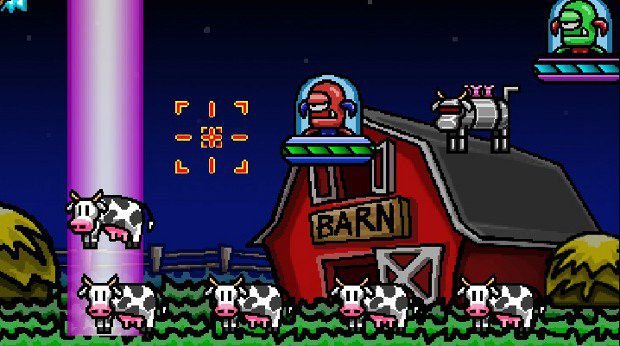 This little charmer sees you defending cows from aliens intent on abducting them for horrible experiments. Armed with your gun, which fires in both semi-automatic and full-auto (but can overheat), shoot down saucers for cash before they can abscond with the cattle. Spend the money between waves on weapon upgrades to kill even faster. Get three of your buddies to shoot along with you in the local co-op mode.

I don’t typically go in for the sniper/shooting gallery games but I thought this was pretty fun. The upgrades provide noticeable improvements to your abilities and the two firing modes add a nice bit of complication. Difficulty curve seemed a bit steep from what was available in the demo and the potential is there for murder-inducing challenge in later waves, so be prepared for that. 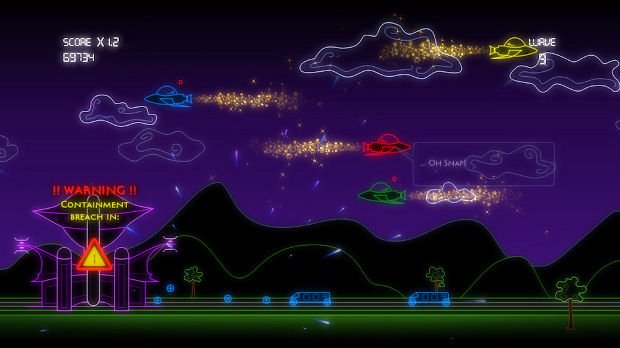 Defend the mothership from hostile blue Wheelers by issuing commands to the alien bomb squad. The wheelers roll their way across the screen while you drop bombs on them using four ships corresponding to the Xbox controller face buttons. Each ship has one bomb to drop on a pass and hitting Wheelers consecutively builds a score multiplier.

It’s nothing fancy but it doesn’t need to be, and it’s a fair bit more polished than most of what appears in the marketplace. 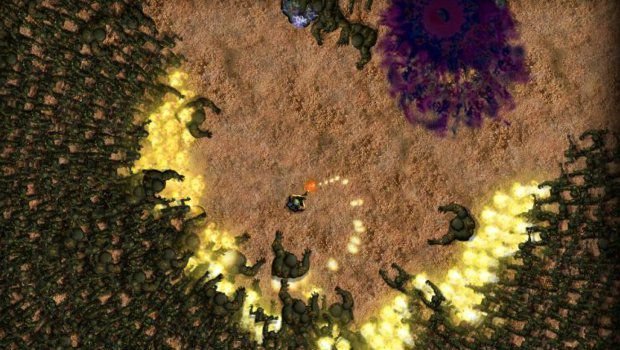 You are a cloned soldier dropped into a swarm of zombies and forced to collect power cells from them. You have one minute to grab six power cells or you die but I doubt you’re going to get a better deal from the zombies. Succeed and you get another minute to get another six cells. A variety of secondary weapons are at your disposal each round and collecting three nuclear icons activates a smart bomb killing everything on screen.

I bought Zombie Death Zone on impulse because it was silly and has hordes of undead shambling. Admittedly, it’s not amazing or anything. It can be rather frustrating sometimes as the game occasionally won’t even show you a cell for half of your time, well beyond the point where it’s feasible to start collecting. But it’s an amusing diversion nonetheless at only a buck.