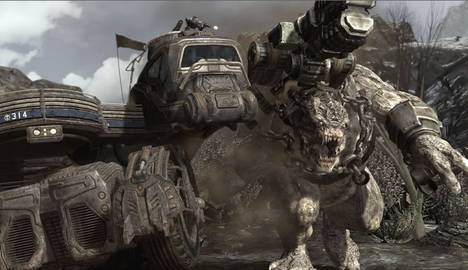 The dreamy Cliff Bleszinski was at the Xbox 360 Spring Showcase to show off Gears of War 2. We got to see the second level of the game, which is what was released a week ago in the latest trailer. 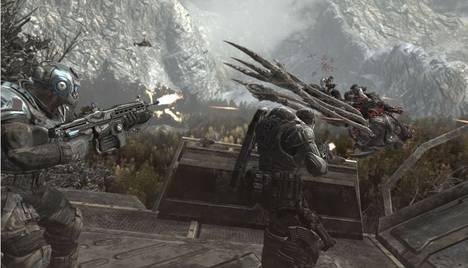 This time around, the Locust can now sink entire cities underground. The last outpost for humanity can’t be sunken directly, as the rocks they live on cannot be penetrated by the Locust Horde. So instead, the Locust have been sinking cities all around the last main outpost and eventually, they’re going to be able to sink the last city by digging a giant hole around it.

So now, the new plan is for humans to take the battle straight to the Locust by going underground. Humans have created these giant machines called Grind Lifts that act like elevators that dig down underground.

The level starts off with Fenix and crew riding on these giant vehicles transporting the Grind Lifts. The transport units are traveling to their target location along with helicopters and tanks, all itching to give the Locust a bullet in the head. Here we’re introduced to a new character called Dizzy. With humanity dying out, the Coalition forces have reached out to humans living in abandoned cities trying to hide away from the Locust and the war altogether. The Coalition have offered families food and medical supplies so long as the capable men in the family fight in the war. This is where Dizzy comes in. He’s piloting the giant transport you’re on, just for the promise of food and the safety of his family. 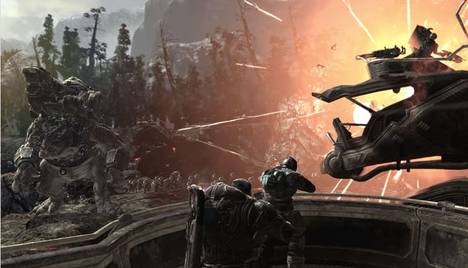 After about a minute of riding, the Locust Horde make their presence known and go on the offensive. First up, mortars are being flung at Fenix’s transport. You have to shoot these before they land onto your position. After a few of these are taken out, a flying unit of the Locust comes by and starts slamming into your transport. After dispatching this enemy, a little dialogue exchange takes place between Dizzy and another Transport pilot.

At some point in the battle that just took place, the brakes are damaged, and Dizzy almost loses control of the Transport as it goes down a hill. Dizzy is able to stop the Transport, but has to get out and repair things. He heads on down and you have to hop on down with him and watch his back. Locust soldiers start emerging from their holes and try to take you and your crew out.

Dizzy fixes the transport and it’s time to roll out again. After about another minute, you come across a scorched field where more Locusts and a Brumak appear from underground. There are dozens upon dozens of Locust running around on the ground, all of which you can shoot at if you want. The main focus here should be the Brumak, since they can do some serious damage. 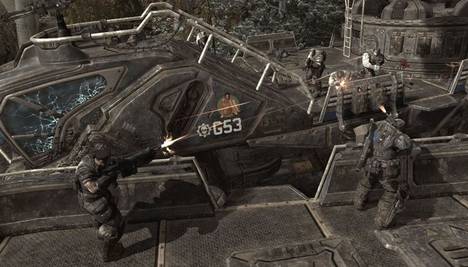 The Locusts are still a threat and are using grappling hooks to climb up onto your Transport. Here we see some of the new weapons shown off, as well as the Chainsaw duels. Fenix also grabs a weakened Locust soldier and uses him as a shield while taking out some of the other Locusts. Fenix then snaps the Locust’s neck and dumps him off the side of the transport. It’s at this point where the Locust hijack a transport and start playing chicken with you. After knocking them off into a cliff, it’s another Brumak battle. He’s easily taken out and the Transport knocks the Brumak out of the way. During this battle, a giant spider-like enemy appears. It doesn’t directly attack you during the battle, but it looks a hell of a lot more fierce than a Brumak.

“… You’ll be able to chainsaw enemies between their legs up through their taint all the way up to their throat …” Yeah, I’m already sold.

Filed under... #Events#Gears of War