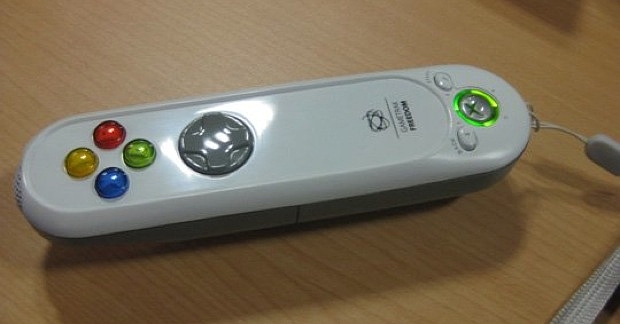 Boom. PDP is all up in Microsoft’s grill with the Gametrak Freedom wireless motion controller. It’s essentially a Wii remote for the Xbox 360 — something Microsoft has been long-rumored to have in the works. PDP obviously isn’t first-party, but this remote doesn’t look like a slouch. GameSpot recently got their hands on it and gave all of us taste of what to expect when it hits this fall for around 70 bucks.

As you can see from the picture, the controller is missing a few buttons. Only one trigger (it’s located on the peripheral’s backside), the d-pad and the face buttons made the final cut. The Gametrak Freedom gauges movement much like Wii remote — accelerometers and an “ultrasonic transducer” — but does the motion sensing a bit differently. Instead of one sensor bar, you need two.

A little game called Squeeballs will be included with the controller. GameSpot describes it as a party game. Go figure.