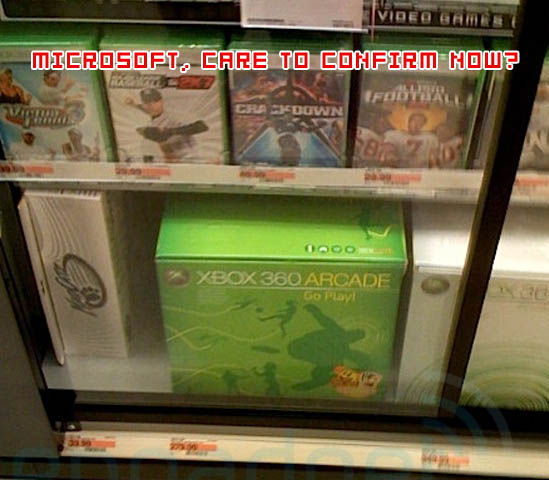 Microsoft still isn’t saying much about the rumored “Xbox 360 Arcade” bundle, even after we’ve seen retail displays confirming its existience. Let’s see how much longer they can tip toe around the issue after we’ve seen the whole box!

A Target store in Haverhill, MA happened to have one available for sale, according to engadget. The the “spy shots” are a bit blurry, but the price tag looks like it lists a price of $279.99, which would further confirm rumors.

As Nick told us before, this bundle is rumored to come with a 256mb memory card, a wireless Xbox 360 controller, the console, and LIVE arcade games Boom-Boom Rocket, Uno, Feeding Frenzy, Luxor 2, and Pac-Man. It’s too bad that the photographer didn’t think to use his Internet Matlock-ish spy cam skills to confirm the pack-in items, though.