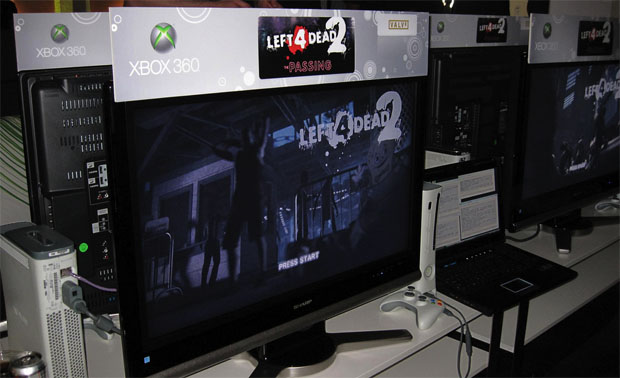 That’s the first Left 4 Dead, folks. New DLC for the older game, to kind of go alongside the new Left 4 Dead 2 DLC.

Confused? There’s two DLC packs coming, one for each game. They kind of tie together.

First off, the L4D2 DLC, The Passing, has the first game’s survivors meeting up with the L4D2 cast. Aside from the new story elements, this will also add single, multi, and co-op to the game. Coming this spring (March), it will include new arenas for Survival, Versus and Scavenge modes, and introduce a new co-op challenge mode. Hot. We’re working on some hands-on of this now.

This new DLC for the first game relates to The Passing in that it explains how the L4D1 survivors got there. You play as the old crew, heading south to meet the new one. It is said to be coming a month later. They have no title for it yet, and are still working on it. More details are to come from Valve soon.

There’s a comic coming that ties the stories of the two games together. A reader will be released on Xbox Live for this sometime in March or early April.