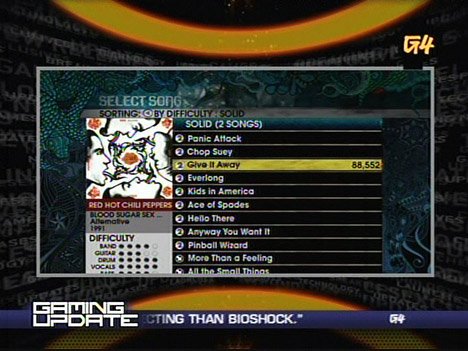 When Rock Band 2 was announced yesterday, Harmonix wasn’t giving any details of the game’s song selection, saying only that the game has “the strongest playlist we’ve ever assembled.” Now, we’ve got a preview of that. Dtoider power-glove has sent in a doozy of a tip from the ScoreHero forums, that bastion of die-hard music game fans around the world.

According to the forumites, tonight’s episode of X-Play showed a screenshot from the song selection screen in Rock Band 2 — you can see it for yourself above. It shows the cross-game DLC compatibility that Harmonix promised: note that the last two songs, Boston’s “More Than A Feeling” and “All The Small Things” by Blink-182, were made available as DLC for Rock Band.

Here are the other nine tracks, and their presumed artists:

Here’s some more in-depth analysis of the screenshot. Note the “2” to the left of the first nine tracks, and the different circular icon next to the two songs from Rock Band — it’s the arrow that signifies DLC, so that’s how they’re differentiating between songs on the Rock Band 2 game disc and downloaded tracks.

Either way, that purported tracklist has me in a tizzy. I want this game NOW.

[Update: The ever-so-gracious power-glove has provided us with a significantly improved image. It confirms that the icons next to the Boston and Blink-182 songs are the old download arrow icons; the post has been updated to reflect this.]