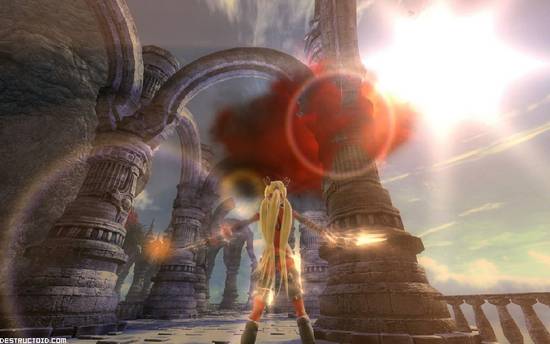 X-Blades, an action game set to hit the PlayStation 3, Xbox 360, and PC later this year, has kind of been flying under my radar. I hadn’t heard anything about it until this past weekend at the SouthPeak Games booth at NY Comic Con, where they had footage of the game running as part of a looping trailer.

Based on what I can tell, the game follows the adventures of Ayumi, a pistol and blade wielding blonde who thinks it would be a good idea to fight monsters while wearing metal chaps. Watching the gameplay, I was reminded a lot of Ninja Theory’s Heavenly Sword, perhaps mostly because of Ayumi’s flowing blonde locks and exposed mid-riff. (The title may play more closely to Devil May Cry for all we know.)

We were sent some new screenshots today, along with word that the development team has added lots of new objects into the game over the past few weeks. Things like statues and containers are now breakable, and they may reveal power-ups or treasures. Where they got that innovative idea, we may never know.

If you want more information, the game’s Web site appears to be chock full of information, which makes me wonder why it’s taken so long for X-Blades to get our attention.