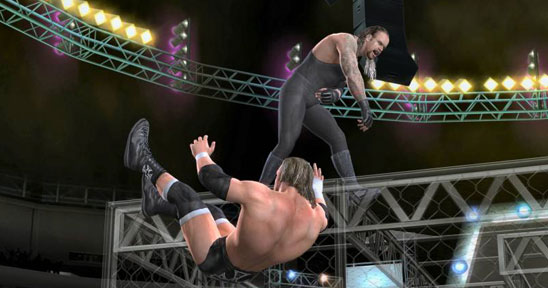 This isn’t necessarily a bad thing — last year’s game featured some sharp looking muscular and sweaty dudes, and for the first time in the history of wrestling vidoegames, the crowd wasn’t made up seven 2D sprites that were duplicated around the entire arena. Still, the game continued to struggle with issues it has had since its inception: stilted animation and hair that would make a scarecrow blush in embarrassment.

WWE Smackdown vs. Raw 2008 doesn’t look to remedy any tress issues (bald is the new mullet, anyhow), but a few of the screens seem to indicate that the game’s character models might have the best looking teeth gamers have ever seen. The screens also don’t reveal anything new about the gameplay, but it appears that gamers will still be able to punch, slam, inappropriately fondle, and throw their opponents off of cages.

Along with an updated roster, is there really anything else this game is going to need in order to sell by the truckload? Dudes with rattails who wear hunting caps can also purchase the game on the PlayStation 3, PlayStation 2, Sony PSP, and (if they’re really exciting about touching sweaty dudes) the Nintendo DS.