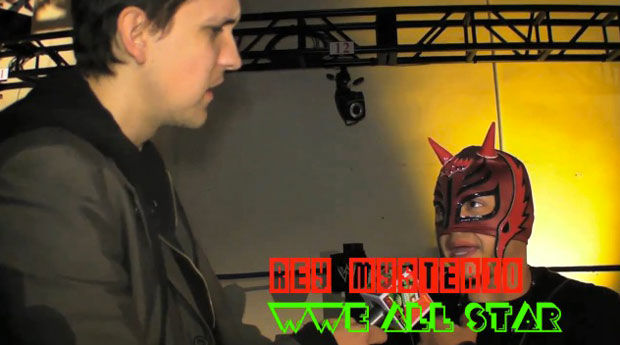 The release of WWE All-Stars is quickly approaching, and recently we had the honor and privilege of visiting THQ’s San Diego office to get a look at the game in action. Jon Carnage had the chance to interview two legends in their respective fields: WWE legend Rey Mysterio and video game legend Sal Divita.

WWE All-Stars is shaping up to amazing, bringing me back to the classic days of arcade wrestling games. Featuring a vast assortment of legends and soon to be legends, WWE All-Stars, it may be one of THQ’s best wrestling games in years. Using pieces of the engine and design for Midway’s TNA wrestling title, TNA Impact!, the developers have made a game that captures the look and feel of wrestling with toy action figures. And that is a good thing.

I look forward to seeing the look on the face of my fellow wrestling fans when they see the amazing promos and dream matches THQ has put into the title. The story mode involving the road to facing the Undertaker has some downright chilling promos with voice acting by Paul Bearer himself. A highlight for me will be the CM Punk versus Stone Cold dream match; the promo alone is Wrestlemania-worthy, and I think I may turn this match into some sort of drinking game when the title ships.

Look for this game to drop on March 29, 2011 and check out the interviews Jon Carnage did with Rey Mysterio and Sal Divita.