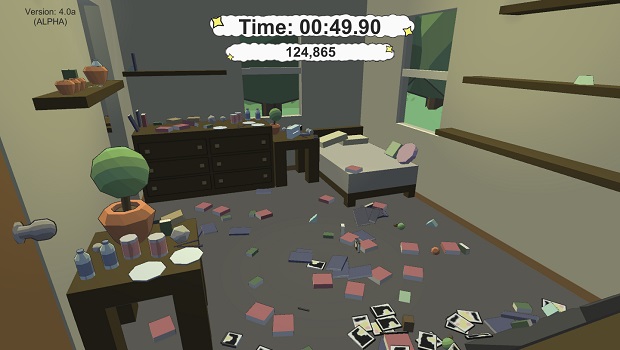 Feel like trashing a room whilst remaining totally innocent? Then Catlateral Damage is for you. It’s a simple game that puts you in control of a cat who has to traverse its owner’s room, knocking over as many personal items as possible in two minutes. It’s like a Katamari game in reverse; instead of cleaning you’re messing things up.

As a former cat owner (to quote Eddie Izzard, you don’t really own a cat, a cat owns you) I’m sure there will be some perverse glee to be had in wrecking someone else’s possessions. My cat would just casually knock things over or saunter all over my keyboard which was annoying.

The cat was never as willfully destructive as my dog that once chewed up my DS amongst other things but then again the cat never savaged my crotch like the cat would. This is why my next pet is going to be something less harmful that needs very little hands on care. Like a snake.