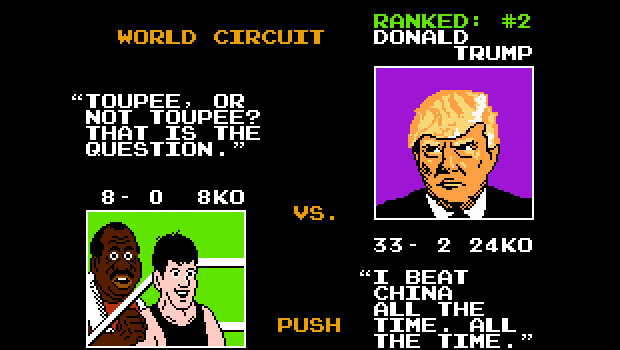 The Punch-Out!! series is known for being politically incorrect in a cartoonish and lovable way. Some would argue that presidential hopeful Donald Trump shares that same brand of charm, and by “some,” I of course mean Donald Trump. Much like Punch-Out!!‘s Super Macho Man, Trump is rarely shy about trumpeting his own self-perceived virtues

The major difference between the two is, one is painfully under-exposed, despite his greatness, while the other suffers from the opposite affliction. Maybe putting the two together could fix both of their problems. With only 3 home console iterations in the past 28 years, Punch-Out!! is definitely due for a little more attention, while multi-media icon Trump is long overdue for a video game appearance. As the world’s greatest living stereotype of American capitalist ambition, who better than Trump replace Mike Tyson as Punch-Out!!‘s reigning celebrity mascot?

They wouldn’t have to stop there, either. Trump is just one of many modern pseudo-celebrities who would make for a great Punch-Out!! opponent. Dustin Diamond (AKA Screech from Saved By The Bell) and Ice-T are two names that immediately come to mind, though Ice-T may be too busy running for the President of gamers to get involved with that venture. There’s also a rumor that he’s actually an alien from a planet ruled by elemental life forms, which may cause him some trouble.

I wonder if you need a birth certificate from the planet Earth in order to be elected gamer President?