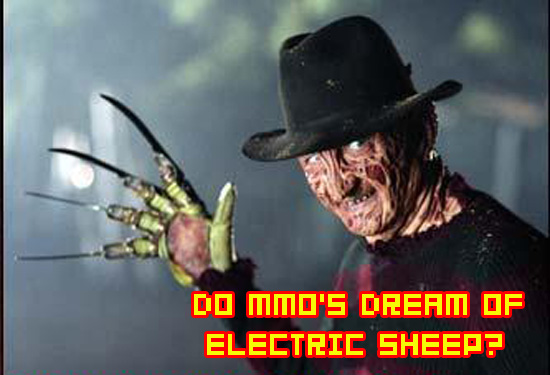 My Fourth of July was spent taking it easy (this is a chic phrase for slacking). I’ve been on a horror kick lately, and I haven’t seen a Nightmare on Elm Street film for at least 5 years, so I borrowed a few from a friend and settled down for some bloody camp and bad dreams. Maybe they were scary in the eighties and nineties, but as a hardcore horror fan, I was only enjoying them because I was remembering them as I watched. I found them most non-frightening when Freddy Kreuger was onscreen, or even worse, when he had actual dialogue. (When were catchphrases EVER cool for evil demons?)

As usual, after watching a horror film that I thought could have been more than it was, my inner mental gibbering immediately started on how horror isn’t what it used to be — it isn’t scary, why can’t someone do something decent, and thank God there’s a Silent Hill series at my disposal when I want to remember what it’s like to be afraid. As I headed into the kitchen, the topic of horror flourishing in games blended into another idea before I even realized what I was thinking of. Would I play a horror MMO?

Hit the jump for the diatribe.

You know, I would. HOLY COCKS YES I would. Immediately, all the secondary ideas came to mind. How would it work? Would people want to log in to a consistently frightening world? Why would it be frightening? Could an idea like Event Horizon’s haunted ship be translated into an entire dimension? Bioshock has definitely got the idea — The Rapture should unnerve many an explorer. However, that’s an FPS adventure…and would greatly differ from the logistics of a dynamic world.

One major point of difference is that a horror is rarely a social experience, whereas MMOs thrive on the interactive aspect. Some gamers would say that one difference kills it off before the idea even gets started, but somehow this clash makes me more interested. Could it be possible to play with other people, but only through a complex system (you must rescue a friend or undo a curse before you can play with them)? Would an MMO that made you work to gain interactivity push players to work for it, or simply shut off their PCs in frustration?

Another common complaint of MMO players is that all they do is grind and that the games lack an emotionally engaging story. Perhaps an MMO in a post-apocalyptic setting could kill two birds with one stone — creating a backdrop of consistent unease and fear while telling a story that all human beings can relate to the terror of. Add in zombies and you could be playing 28 Days Later Online. Imagine the pressure of having to avoid being infected every time you logged in to play, or permanently losing your character if he or she was.

I would like to see the MMO genre electrified, as even consistent WoW players admit to boredom or quitting the game because they just aren’t having fun anymore. Bioware claims to be making an online title focused on “story, character and emotion”, which gives us something to look forward to. When I think about playing a game that would keep me on the edge when I played, unsure of what could happen each time I logged in, I think that just might be the thing to make me interested in MMOs again. The question is, How do you execute it to strike the ideal balance between fear and playability?

I don’t have answers for my questions yet, but I do know I’d be off to the game store like a shot to get a title like this. Hell, if I still went to Gamestop I might even reserve the damn thing out of excitement. Would you do the same, or would it still be just another excuse to spend 60 hours a week not having a life?