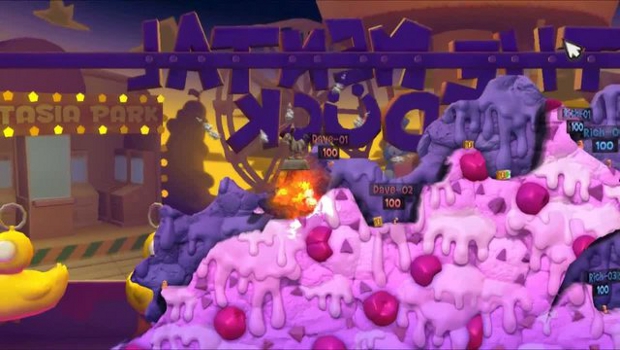 When I’m digging holes in my garden for completely normal and not in the least bit criminal reasons, I often see worms. They are always wearing the latest fashions and spouting hilarious quips. It makes gardening a delight. Team 17 wants to emphasize these creatures’ characters even more than in the previous Worms games. Senior producer Kelvin Aston explains exactly how they have gone about doing that in Worms Revolution.

Instead of all worms being equal, this time they are split into four classes. The soldier is the base class and will be easily recognizable to anyone who has played a Worms title before. The scout is fast, agile and very small, able to dig tunnels no other classes can enter, and he’s also really good at looking after your dog. The scientist is a support class and provides health upgrades for his squad, while also being a master of sentry guns. Finally, there’s the heavy. He’s the tough guy, able to take a beating as well as dishing them out. To balance out his strength he’s incredibly slow and can’t jump very well. He’s almost too heavy for the jet pack.

Worms like to stand out in a crowd, so Team 17 has provided them with lots of incidental customization. It won’t alter the gameplay, but it will make things a lot more amusing. There’s a huge amount of hats, wigs, glasses, and trinkets. Want to have a Lady Gaga worm who also likes football? No problem. On top of that, more voices and phrases have been added. Hopefully that should ensure you don’t get driven insane by your little warriors spouting the same lines over and over again.

It looks like the game is shaping up nicely, and I honestly can’t wait to check it out. In the mean time you can get a chuckle out of the video and keep waiting.