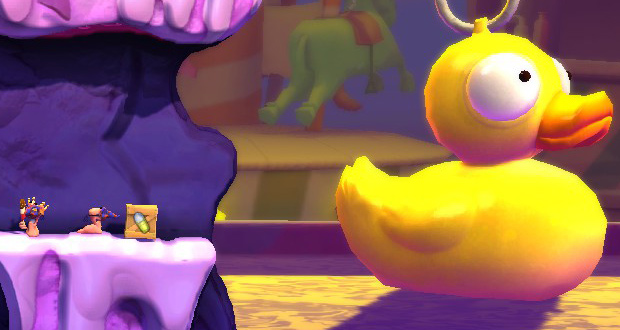 Bring your ticket and your Bazooka!

What could be better than worms and ice cream? How about worms, ice cream and a arsenal of crazy weapons that you can blow up your friends with. Team17 has released the first piece of DLC for Worms Revolution, the Funfair Pack.

The Funfair Pack includes an array of amusement-park themed attractions for one and for all. Team17 has included five new single player puzzle missions to test your mettle on, as well as four new weapons to dish out even more pain on your wormy companions. Players will also have the new Burger and Ice Cream, along with the Red Nose and Masquerade accessories to clown around with.

The Worms Revolution Funfair Pack will be available today on Xbox Live, PSN and Steam; and is priced for at a decent 400 Microsoft Points, or $4.99 for non-banana dollar currencies.