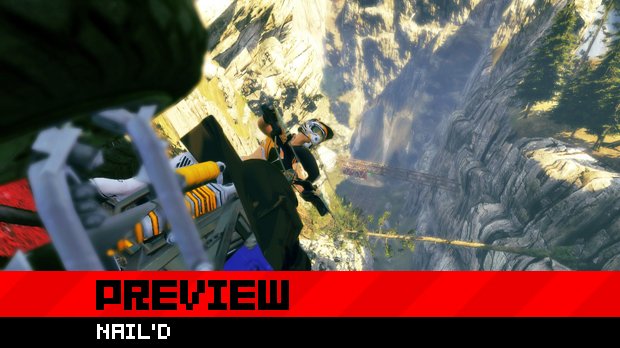 If there’s one thing we probably have enough of by now, it’s the MX/ATV genre of racers. Is there really room for another off-road racing game? There is with Nail’d, as this game is doing what the others haven’t: make physics its b*tch.

Nail’d is an arcade-style racer with the extreme meter turned up to 11. You have only one priority in Nail’d, and that’s to get to the finish line as fast as possible.

Follow on after the break for Destructoid’s exclusive world premiere first look at Nail’d. 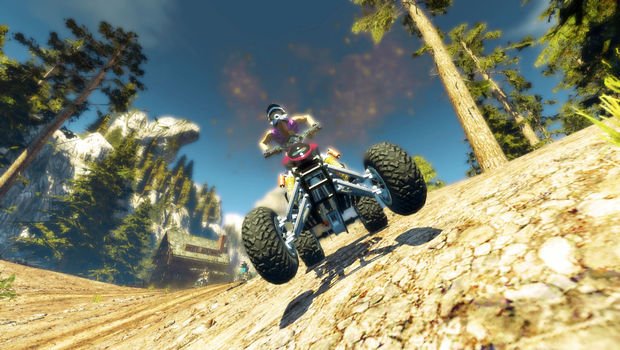 Nail’d wants to be the fastest off-road racer ever made. Quads and bikes will race side by side as they dash through the extremely vertically-focused tracks. The tracks are as crazy as the amount of speed and air you’ll be reaching, and there are a ton of different paths you can take through the levels. So many paths, in fact, that there is no mini-map displayed — it would just look like a big plate of unhelpful spaghetti. Each of the tracks is a straight shot, not a circuit, so there is no lapping. While there is no mini-map, you will see a bar on the left of the screen that indicates how much further you need to go to reach the end.

There are a ton of huge jumps, obstacles and distractions scattered throughout every course. I was only shown one track that was loosely based on Yosemite National Park, and there was more crazy shit going on than I could count on both of my hands. There were rock slides, giant buzz saws moving about, and a jump that saw you sailing through a wind turbine. In one section, a 747 jet lands in front of you. There was even a segment that had the player racing on top of a moving train for several seconds. Some of these obstacles are meant to slow you down, while a lot of the other things going on are just there to make you lose focus. Yes, Techland — the developers who previously worked on Call of Juarez: Bound in Blood — put things in the game to purposely fuck with you. 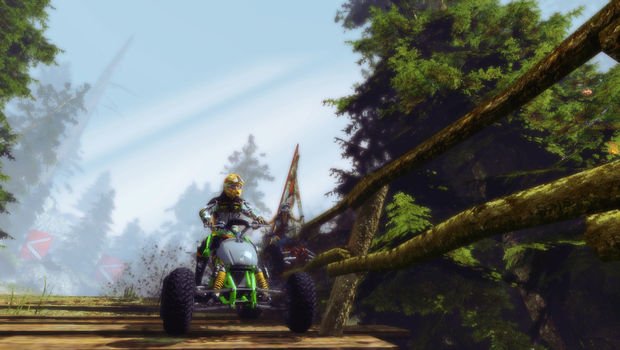 Visually, the game was looking beautiful for being in a pre-alpha state. There was a ton of detail to the environment, everything in the background was rendered in real time and mud was getting splashed all over the place. Techland is making use of their Chrome Engine, and it’s kind of funny seeing that engine going from a Wild West setting to an extreme off-roading game.

Again, this game is all about speed, and you will have a boost meter that needs filling up to help you get through the courses as fast as possible. Doing simple tricks such as popping wheelies and going through rings of fire will help fill your boost meter. Players that find themselves sucking too hard will be given extra boost to help them catch up, too.

The main focus of Nail’d is speed, so you won’t have to worry about modding your rides for the best performance possible. You will have some control over your riders’ and vehicles’ looks; these customization features are unlocked by accomplishing specific goals in the single-player and multiplayer. 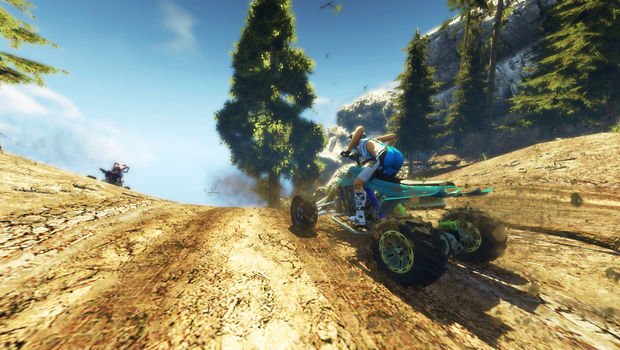 The game will feature a time attack mode, career, online/offline multiplayer and a mode that will let you design your own parameters. Up to twelve players will be able to race together online (local multiplayer numbers have yet to be determined). Other features will include a replay mode and worldwide leaderboards. You also get to see your stats in the loading screens — a nice touch, considering loading screens for racing games tend to be filled with nonsense.

Really, I think the best way to describe Nail’d is that it’s Tony Hawk’s Pro Skater meets Burnout meets a hurricane. Nail’d is about blazing through absurd courses while physics just accepts that it’s more of a suggestion than a reality here.

I have high hopes for Nail’d, and I’m looking forward to some actual hands-on time at E3 in a couple of months.