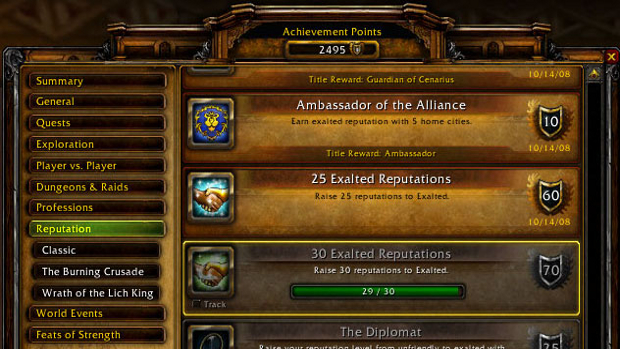 I like to pretend that I’m above achievements and trophies, but that’s a bare-faced lie. One minute I might be questioning the point or merit of these virtual marks of honor, but the next I’ll be trying to earn them.

At a GDC panel, Cory Stockton, World of Warcraft‘s lead content designer, revealed that 13 billion achievements have been unlocked since Blizzard instituted the system, with 8.7 million being earned per day, on average. When the feature was first implemented, I was sceptical, but after a wee while I found myself going back to old dungeons and doing all manner of extra quests just to gather more of these ostensibly worthless rewards. And I loved it.

Stockton explained that the achievements encourage players to explore and seek out new content, and that they aren’t merely a “badge of honor.” Their purpose is to extend gameplay, rather than reward power levelling or pointless things like spamming abilities. One of the most popular achievements, Stockton revealed, is the Leeeeeeeeeeeeeroy! achievement, earned by slaying 50 Rookery Whelps in 15 seconds, and it’s been unlocked by about 11 million players.

Filed under... #Achievements#Blizzard#GDC#Mac#multiplayer#Online#World of Warcraft