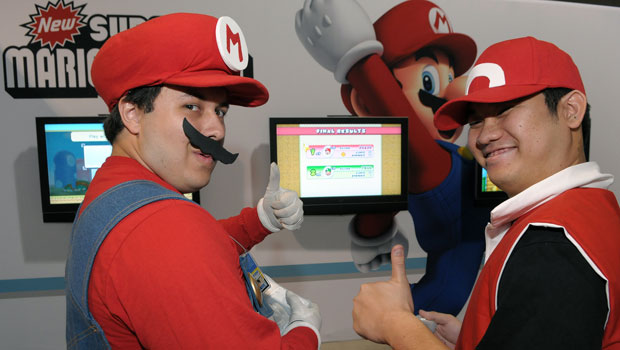 Nintendo kicked off its World of Nintendo Tour this past weekend at the Long Beach Comic Con, bringing along with it a bunch of games including New Super Mario Bros. and The Legend of Zelda: Spirit Tracks. Oh, creepy dudes is dressed up like Mario might show up. What the hell, Nintendo?
If you’re interested in getting your hands on the titles early, the World of Nintendo Tour isn’t slowing down just yet. From October 9 through October 11, the tour lands at America’s VideoGame Expo in Philadephia, where we hear it’s always sunny. Then, the Big Apple Comic Con in New York City — which runs from October 16 through October 18 — gets the treatment.
Anyone plan on going? If you do, take pictures for us, and watch out for creepy Mario. I don’t like the way he’s looking at the camera, and I have a sneaking suspicion that mustache isn’t even real.