One thing about this year’s GDC is that virtual reality made a huge splash. And that would be an understatement. With the news of Oculus Rift development kit 2 and the reveal of Sony’s VR headset, it’s looking like there will be an interesting future for these peripherals. Now, we’ve got another title looking to jump on the VR hype.

After an impressive debut on Steam Greenlight, the developers from Vertigo Games are taking their experience with simulation titles and applying it to new type of online game for the PC. And with the big push for VR happening now, they plan to have World of Diving take advantage of the Oculus Rift in surprising ways.

In World of Diving, players will be able to explore, observe, and collect loot on their own or with a team of other divers online. While exploring the waters, you’ll be able to engage in missions that task players to complete a variety of challenges such as: taking pictures of aquatic life and sunken structures, venturing to wrecked ships, competing in races, and much more. The environments are also procedurally generated, à la Minecraft, which makes exploring the ocean depths feel fresh with new layouts, reefs, mission structures, and aquatic populations.

One way for players to enhance their experience with World of Diving is through use of the Oculus Rift. It’s fully playable with the VR headset, and the developers wanted to allow players to utilize its features after they first got their hands on the device.

“When the device itself came to the office — I’m a scuba diver myself — I put the thing on my head and I was like, these are like diving goggles,” said creative director Richard Stitselaar. “We did some tests, prototypes, and it came together. It was a side project for a while, but since November or December of last year, we began to put all our resources into the game.”

I have a bit of a confession to make. This was my first time playing with the Oculus Rift, and it was plenty reassuring trying out a title that was relaxing and places a lot of emphasis on offering a soothing experience. An aspect that World of Diving succeeds in is offering an inviting and calm atmosphere, and in many ways it felt like an evolution of the design from the Wii’s underwater exploration title Endless Ocean.

The demo started up with a bit of a tutorial, where another developer from Vertigo guided me along in game. This was a co-op session, and it opened up some unique opportunities for special missions. I was a controlling a female diver, which surprised me as I looked down with the Oculus Rift headset and saw a female body. The overall visuals looked impressive with the headset on. Even though I was using the standard-definition version of the Oculus, I found myself drawn into the underwater world that I saw.

Players can use a controller and both mouse and keyboard to play World of Diving but during my session, we used a controller — it took some getting used to. Obviously, the headset controls vision and camera movement, which took some adjustment. But over time, I got more and more into it. Swimming through the waters felt graceful and smooth.

The developers wanted to create authenticity with the diving controls, while at the same time keeping it fun. Interestingly enough, the Oculus Rift helps to streamline much of the controls by allowing for some movement with tilting your head in a direction you want to move in. 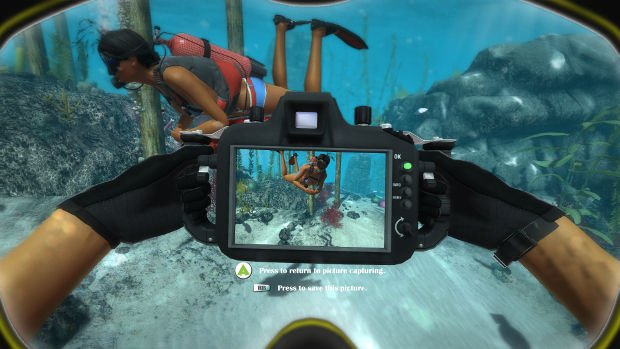 Of course, not many people have tried the Oculus Rift, let alone have access to one — so the developers at Vertigo Games were clear that it is not required to purchase one to play World of Diving. “While we did design the controls with Oculus Rift in mind, because there are a number of aspects of design to consider, it’s not required that you have the device to play the game. It’s fully playable and enjoyable without it,” said Stitselaar.

Players can fully customize characters, from their body type, gender, scuba gear, etc. They can even acquire a player home. The camera is an item that will be useful or amusing, depending on what type of situation you find yourself in. In one instance, my co-op partner and I saw a sunken statue and we took it as an opportunity to take a picture with it. Positioning myself just right, I let the camera float in front of me and my partner, and we took a selfie in front of the statue. It amusing, fun, and it also showed just how much potential players have to find something interesting to do while in the field.

Speaking of potential, the map will always be be filled with missions and side-objectives for players to engage in. Moreover, World of Diving will take advantage of its community’s creativity by allowing players access to the same tools that the developers use to create missions in game. By implementing a rating system, users in game will be able to vote on their favorite user-created missions, and the highest voted ones will be placed at the top for more people to see.

Though don’t get too comfortable in the waters, as there is still an element of danger present. At any time, you may come across hostile underwater life such as eels and sharks. As combat is not a big focus, and taking on these creatures is also not an option, players will have to remember that you’re not always safe in the ocean. Because of this, the developers have plans to release potential updates in the future to get players closer to the action, which include shark cages.

Even though this was my first time using the Oculus Rift, and I was a bit skeptical of the device, I came away pretty damn impressed with World of Diving. It felt very zen, if you will. Except when I went diving into a sunken ship with enclosed walls — my heart sank a bit when that happened. I’m somewhat claustrophobic, and the Oculus Rift enhanced the perception of closeness during some points. But that’s not a bad thing, per se. It’s impressive tech, and it’s used quite effectively here.

Initially, I was worried that the VR aspect would be a vital feature, but even without the Oculus Rift as a hook, I still feel there’s a lot to like with this title. The procedural map design is very refreshing for this type of game, and the continued support from the developers and community will insure that there will be life in the World of Diving for a long time to come.