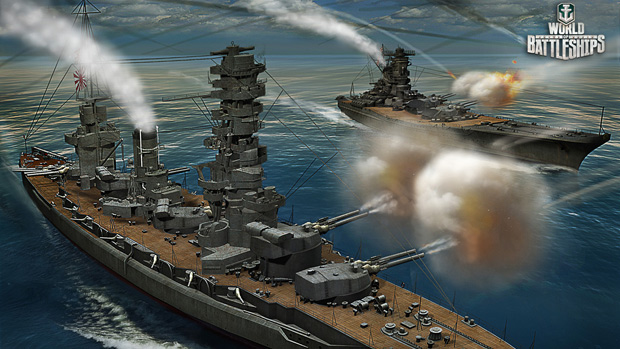 If you didn’t care enough about tanks to play World of Tanks, but love battleships, then you could do worse than keeping an eye on the official website of World of Battleships for future beta shenanigans.

Wargaming.net’s upcoming free-to-play multiplayer title promises a choice between three main classes of ships — aircraft carriers, lumbering battleships and heavy cruisers, and speedy light destroyers — that should provide plenty of strategy for the online team-based gameplay. You are going to play as a team, right?

Furthermore, the stuff you earn in World of Battleships can be distributed to World of Tanks and World of Warplanes so that playing one game won’t cost you progress in the other, but will instead offer you some choice in where you want your hard-earned points to go.

I really love me some naval warfare in videogames, which has become a bit of a stagnant genre after Battlestations: Pacific — unless you are into the more hardcore simulation type of games like Naval War: Arctic Circle. The last arcade type of game I tried out was Naval Assault on the Xbox 360, which was pretty damn terrible. So I’m curious to see if World of Battleships will get me back into that godly feeling of maneuvering a giant floating hulk of steel armed with massive guns that take ages to reload.

If it doesn’t, I’ll wait patiently for World of MLRS.