[TheBlondeBass’ Bloggers Wanted entry concerns a series that is close to my heart: Paper Mario. The Mushroom Kingdom has never been more alive and more colorful. Much like the Koopa Bros., these games are the Coolest of Cool. ~ Shade]

It’s no secret to anyone that I love Mario RPGs. Starting from Square Enix’s Super Mario RPG on the SNES, these games have a unique blend of charm and dynamic gameplay, which really resonates with me. My favorite of all is Paper Mario, on the Nintendo 64. After getting a GameCube, I also got the chance to play the sequel, Paper Mario: The Thousand-Year Door, and fell in love all over again.

Years down the line, and a couple of unfortunate sequels later, I find myself drawn back to these titles again and again. Why exactly do I find them so enjoyable? Well, a lot of that comes from the fantastic world building.

Let’s start with the original. I didn’t get to play it on actual hardware for years, since our family skipped the PS1/N64 generation, but after seeing an ad for the game in an issue of Nintendo Power, I just knew I had to try the game out. I started playing on a poorly coded N64 emulator as soon as I could, and despite the slowdown and graphical glitches I just kept on playing and having a hell of a time.

Before you even begin, it’s obvious that Paper Mario follows a different format compared to your typical Mario game. Instead of a gameplay demo, it tells the player about the legend of the Star Rod. From the get-go, before any introduction to the main character or mechanics, the game instead puts focus on the world’s lore, up until Bowser takes control of the story by stealing the Star Rod. 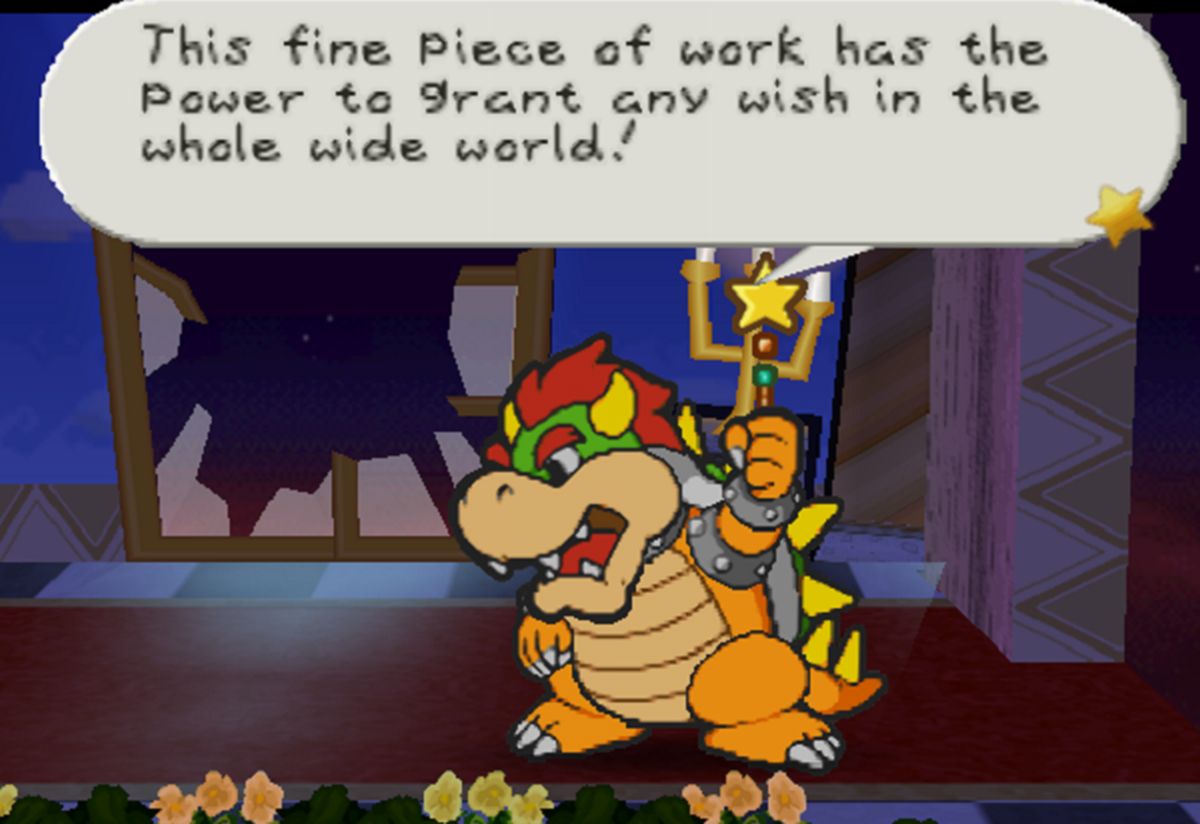 While Bowser might have stolen a mystical artifact, you’re nonetheless casually invited to a party at Peach’s Castle (Luigi’s also there). You can stroll around the castle and talk to everyone around at your owe pace, or you can just go see Princess Peach straight away. But starting you off with a couple rooms where the only interaction is talking to varied NPCs fits very well with the sort of game Paper Mario is. It’s a game that’s concerned with making the Mushroom Kingdom feel more fleshed out and cohesive compared to what we see in the rest of Mario’s adventures.

You can even talk to Goombas, Koopas, and other staple Mushroom Kingdom creatures, rather than simply assume they’re evil minions only good for a stompin’. Ain’t that something! 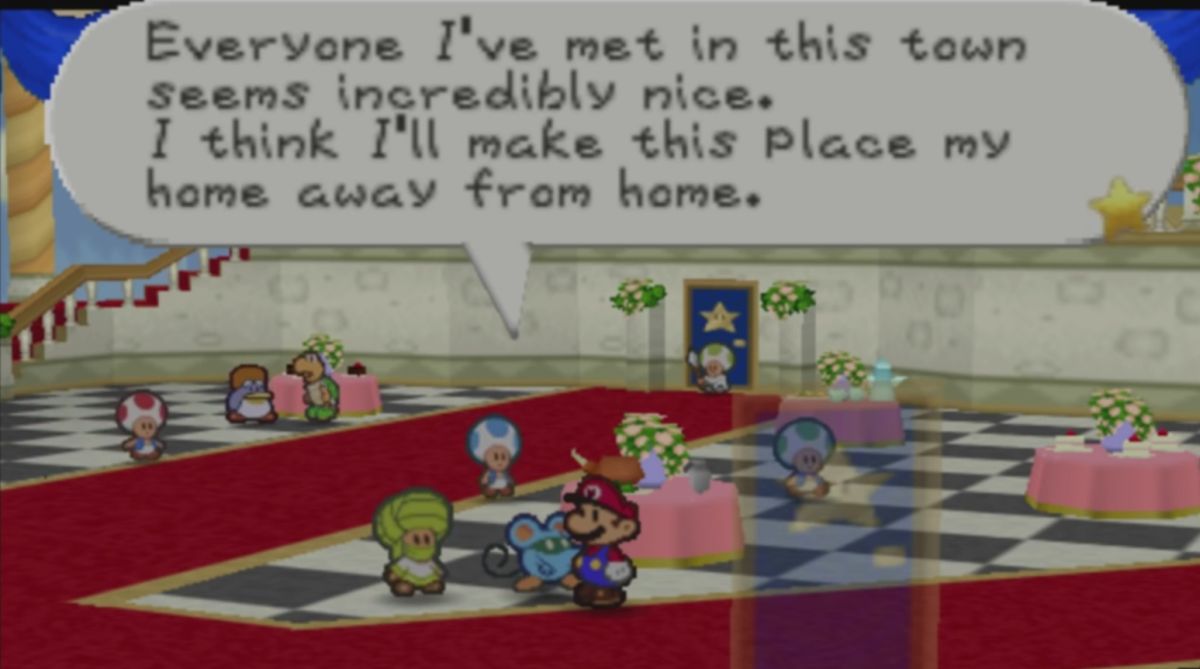 The first character that joins Mario in his adventures is also particularly helpful in fleshing out the Mushroom Kingdom. Goombario, a big fan of Mario and Luigi, can provide information inside and outside of battle about other characters and the overworld. This allows for jokes or background information that would be hard to fit into regular conversations with the NPCs.

The great thing is that this added depth to Mario’s world and characters doesn’t come at the expense of what we expect of the Mushroom Kingdom. The world is still filled with plains, creepy forests, large deserts, ghost houses and jungles, but it also has explorers trying to find mystical pyramids, Koopas that look strikingly like the Teenage Mutant Ninja Turtles (who also pretend to be Bowser), peaceful old ladies that love cooking, and helpful star spirits that help make wishes a reality. My favorite part of the game is a ghost town where the Boos are, ironically, terrorized by a huge invincible monster. The whole point of the chapter becomes to defeat that which cannot be hurt, a surprisingly tense and very exciting scenario for a Mario game.

Paper Mario decidedly feels like a Mario game, and yet the writing shows a hint of what the world is like behind the scenes. When I first played, one of the factors that drove me forward the most (outside of the excellent turn-based gameplay) is yearning to meet new characters, partners, and foes alike. Being able to play as Peach between chapters as she attempts to escape her castle-turned-prison is definitely one of the highlights as well. It’s just refreshing to be able to see what happens in the world when Mario isn’t around. All in all, Paper Mario was a delightful experience in world building for a franchise that’s not known for its writing, one that left me hungry for more. 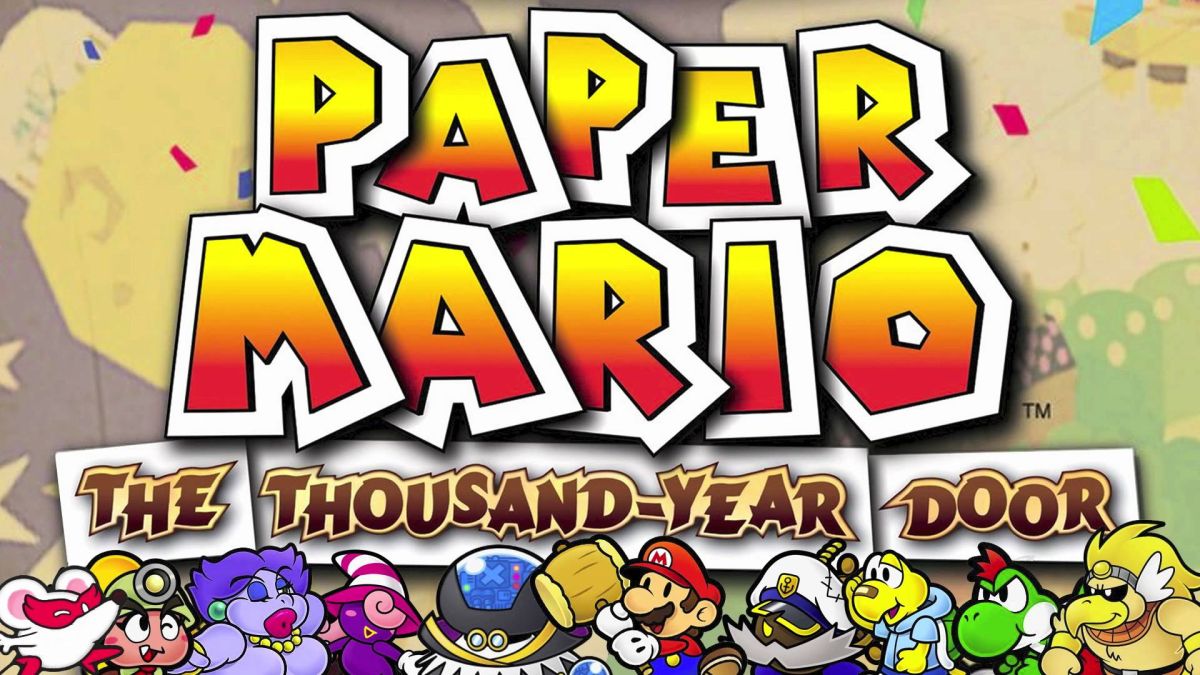 The sequel, Paper Mario: The Thousand-Year Door, released four years after the original on the Nintendo GameCube. But unlike its predecessor, which brought additional depth to Mario and Peach’s Mushroom Kingdom, this entry instead crafts a new world to discover and explore. At its center lies Rogueport, a crime-filled town built on the ashes of a lost city. At multiple points during the game, the parallels with the story of the N64 game are fairly obvious, with Princess Peach inviting you a letter to come meet her, or the grass-themed first level, which has a Koopa partner join you and ends with you fighting a boss in a castle. But that doesn’t mean the world building in this title is in any way inferior or unoriginal.

Whenever The Thousand-Year Door comes close to Paper Mario, it always adds a nice twist to remind you of how different the two worlds really are. Tayce T., the Toad cook in Paper Mario, was a very nice old lady… but Zess T., in The Thousand-Year Door, is anything but. She has a grumpy attitude and immediately dislikes our hero, echoing the general unpleasantness of Rogueport.

Rogueport itself is in a sorry state, and a lot of this is obvious by looking at the graffiti and thieves across the city. Super Mario Sunshine‘s Piantas return, but they too fit in with the darker, bleaker make-shift town. They run a gambling business and look strikingly like members of a criminal organization. A fighting tournament later on is shown to be rigged, preventing challengers from defeating the champ through unfair means. Compared to the first Paper Mario title, the world has a lot more shades of grey, which makes it stand on its own very well.

A nice touch in the first two games is that the paper element is actually not immediately obvious to any of the characters. Multiple times in the story, an evil spirit curses Mario by giving him ‘terrifying’ paper abilities, which should have been obvious if the characters actually knew how their world worked. Being able to turn sideways is not rocket science, for example. Later, when using one of these curses to fold yourself into a paper boat, some non-playable Toads react. “Is he turning into paper?”, they ask. The references to paper are barely there outside of these curses, which makes sense considering the paper aspect was barely a thing in the original title. Consistency and fun world-bending abilities in one strike, a nice feat! 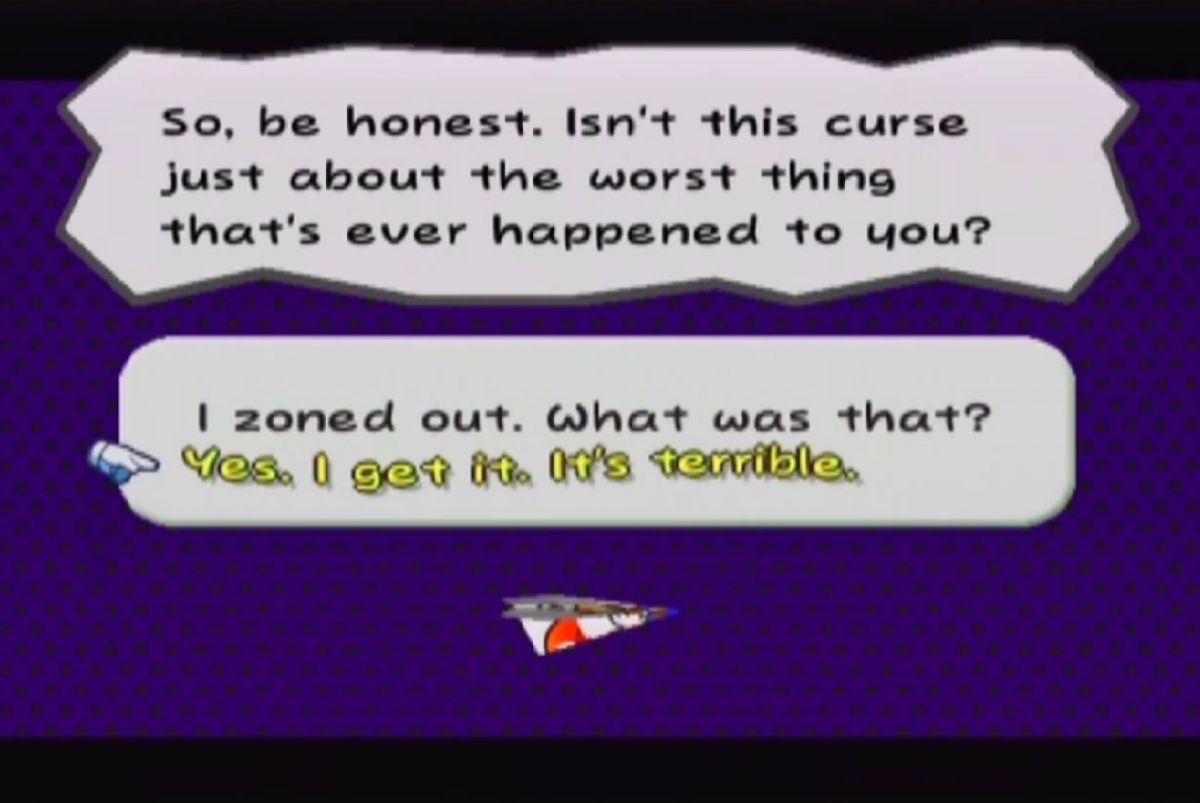 This might just be personal opinion, but I believe that out of any Mario game, there’s not an entry that manages world building quite as much as the first two Paper Mario titles.

Whether you’re chasing down Bowser, or he’s chasing you down himself, whether Luigi stays at home or goes on his adventures, whether you’re looking up at the stars or down at the ruins of a lost civilization, there’s a lot of interesting stuff going on all around you. And while the classic Paper Mario formula has been left aside for a while, I can only hope the spirit that lead into the fantastic world building in these games will live on in future titles.