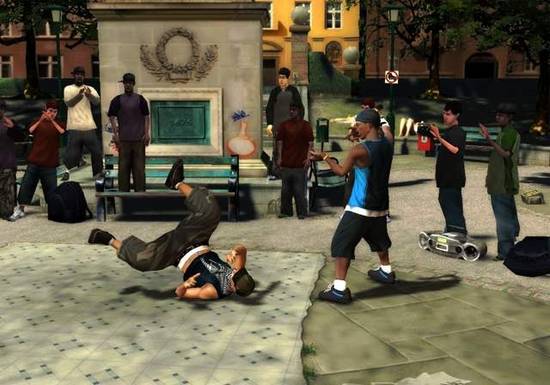 SouthPeak Games has officially announced today that it will be bringing breakdancing title B-Boy to North American PlayStation 2s and PlayStation Portables this summer. This shouldn’t be much of a surprise to anyone who’s been paying attention — we went hands on with the game at NY Comic Con a few weeks back.

The official press release issued yesterday gives some more details on the FreeStyleGames developed digital tribute to street culture and breakdancing, name-checking legendary b-boys like Crazy Legs and the Rock Steady Crew. Additionally, the game will feature 22 authentic venues like Red Bull: King of the Ring, which should sound like a world of intestinal problems if your stomach reacts to Red Bull like mine does.

More info on B-Boy and the standard press release “yada-yada” after the jump.

Breakdancing Title Makes It to the Country Where It All Began

Grapevine, TX – May 5, 2008 – SouthPeak Games announced today that it will distribute “B-Boy” for PlayStation®2 computer and entertainment system and PSP® (PlayStation®Portable) system in the U.S this summer. B-Boy allows players to prove their skills as they challenge the world’s greatest breakdancers.

“B-Boy is the only game that gives players the opportunity to become premiere breakers,” said Katie Morgan, Executive Vice President at SouthPeak Games. “The game’s fantastic playability, dead-on authenticity and high production values give it a style all its own. While it remains true to its roots of the scene, it maintains a feel that gamers will love.”

B-Boy continuously challenges players as they progress from low key neighborhood street battles all the way to high stakes world championships. While working on their skills, they will also have to confront obstacles such as building their crew and their rep by battling real-life b-boys from Europe, Asia, and North America. Pull off impossible moves and audacious combos in order to rise in rank and become number one.

Every in-game move is motion-captured from expert breakers and combined with an advanced control and animation system allowing full control of power moves, stylish freezes and flair driven combos. Players will also be able to compete in style by customizing their own b-boy or b-girl with famous brands like adidas.

Like a needle and a record, b-boys are nothing without their music that drives their culture. B-Boy also possesses a classic rich soundtrack of 35 hip-hop and funk tracks, including The Black Eyed Peas’ “Bringing It Back”, James Brown’s “Get On The Good Foot”, Cypress Hill’s “The Phuncky Feel One” and Eric B and Rakim’s “Don’t Sweat The Technique” just to name a few.

Battles will be won and lost; reputations will be made and destroyed. Anyone can play but only the best will make it to the top.

For more on the culture and history behind B-Boy, visit www.bboythegame.com