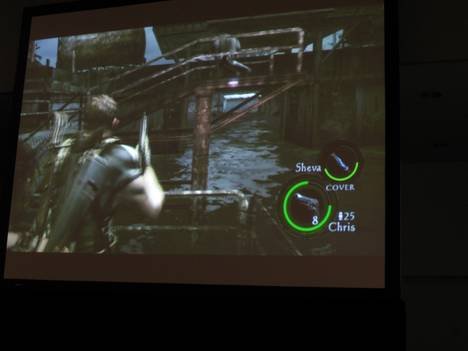 There’s not a whole lot going on as far as videogames are concerned at this years Wondercon. Still, there’s stuff to be covered and I was at the Resident Evil 5 panel last night to see what Capcom had to say about its upcoming survival horror game.

A new level was shown, some fans asked questions, and we also got too see a glimpse of Dark Void. Hit the jump to find out what Capcom had to say, and to check out some awesome, blury photos!

Sadly, it wasn’t really much that we didn’t know already. Since the game isn’t out yet, not much could be shared without spoiling some things.

Before anything Resident Evil 5-related happened, Capcom showed off a few minutes of gameplay footage from Dark Void. After seeing this game in action for the first time, all I could think is “why I haven’t been paying attention to this game?!” Seriously, it looks amazing. Check out Nick Chester’s preview for Dark Void to see what it’s all about.

We were then treated to the latest Resident Evil 5 trailer, which — thanks to some of the promotional material by Capcom earlier this year — I know exactly who the girl with Wesker is. Yay, spoilers! 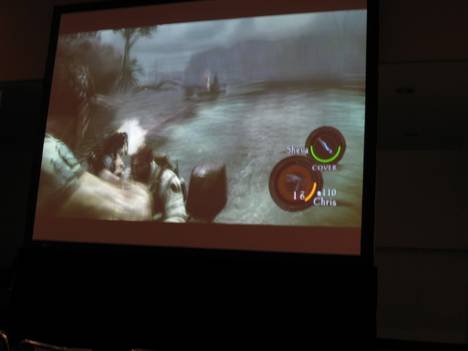 After the trailer, a never-before-seen level was shown off. This level consisted of Chris and Sheva making their way down a river as they fought off the infected. It reminded me a lot of Half-Life 2’s boat sequence. Chris and Sheva had to travel down a river, take out enemies from the boat, and stop every now and then to open up gates blocking the way.

We were only shown a few minutes of this and besides the boat action, it looked like more of the same you’ve seen or played already.

Next up was the Q&A where Capcom was rewarding questions with Resident Evil 5 snow globes! Here are the questions and paraphrased answers.

Question: Will Capcom ever bring back the T/G-Virus zombies?

Capcom: Lots of PR talk which translated to maybe. Oh, and go play Dead Rising for your HD zombie needs … except the Wii version!

Question: Will we get a new Outbreak?

Capcom: No plans, which made a lot of people actually clap when they heard this.

Question: Are there any rewards for playing co-op? Any plans for DLC?

Capcom: No rewards. Just playing with your friends and having a good time. And no word at this time on DLC.

Question: Will Albert Wesker be back?

Capcom: Find out on March 13th (because if they answered this now, then that would be a spoiler)!

Question: Can you say anything about the Resident Evil 2 remake?

Question: What does this have to with the other Resident Evils?

Question: Possible relaunch of the franchise in the future? Flying zombies with jetpacks perhaps?

Question: Same amount of unlockables as in Resident Evil 4?

Capcom: Find out when the game comes out! 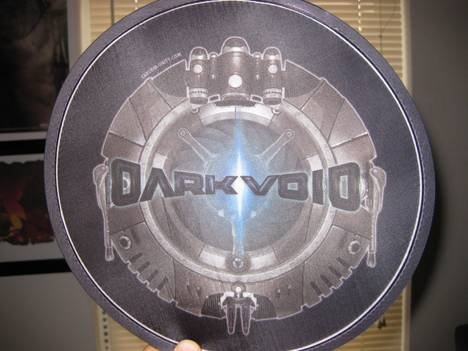 After the Q&A, Capcom held a little contest where they were giving away a Resident Evil 5 poster, and one of the poker table cloths from the Planet Hollywood event. After giving those away, Capcom ended the panel by showing the Resident Evil 5 mini-movies and by throwing out a ton of hover disc things promoting Dark Void. It was pretty funny when they did this. At first they were throwing out a handful at a time but then all of a sudden, they threw nearly fifty of them at once. I’m pretty sure I heard people screaming and some people got hurt.