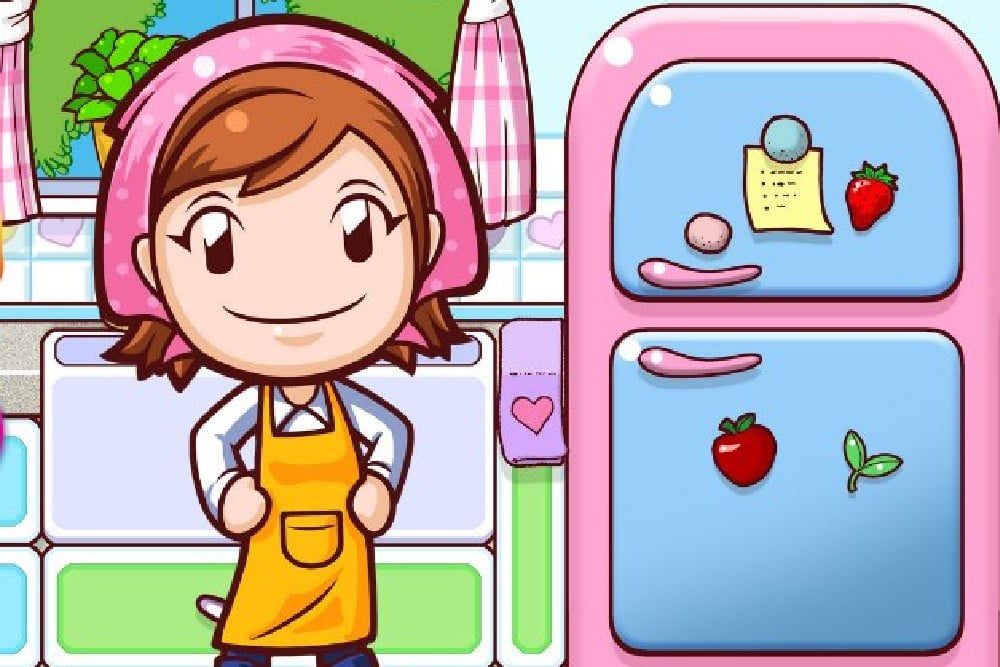 When I was a kid, a lot of my favorite video games involved work. I loved filling takoyaki batter with octopus or folding a pale yellow omelette in Cooking Mama. I brushed my virtual Cavalier King Charles Spaniel with care in Nintendogs, I rushed to serve hamburgers to waiting customers in Diner Dash. I liked these games because they were gentle in their execution, free from the blood, guts, and pressure that the Call of Duty fans in my elementary school esteemed. Fuck green helmets in a fantasy Cold War, I wanted to make Krissy, the titular baby in Barbie: Let’s Babysit Krissy, giggle.

Also, I thought the Salisbury steak graphics in Cooking Mama were good for 2006.

What I didn’t know is that the kind of work these games asked players to engage in was a type of domestic labor historically performed by women and often described as “women’s work.” “Women’s work” is a broad term, usually used to describe jobs performed at home and out in the world that fall under the “5 C’s”: cleaning, catering, cashiering, clerical work, and caring. Women who work these jobs are often underpaid (according to a March 2020 report by the Economic Policy Institute, in 2019, women on average earned 22.6% less than men with similar backgrounds) and disrespected by a patriarchal society that still associates domestic-type duties with skilless, simple labor.

According to history professor Alexandra Finley in an article for The Washington Post, this association goes back centuries, especially as women’s work often “was performed by female family members, servants, and, in many cases, enslaved women.”

“During the 19th century, Americans conceptualized domestic labor as feminine,” she wrote. “This made household labor both vital and invisible to society.” Victorian ideals like the “Angel in the house,” a submissive wife that kept a tidy home without complaint or sweat, baked serendipity and grace into work that can be more accurately described as physically demanding and emotionally draining.

But this isn’t about the perfect Victorian woman, this is about video games. I am surprised by how games like Babysit Krissy and Miley’s Malibu Manicure (a Hannah Montana nail salon game), just like play kitchens and baby dolls, were primarily marketed to young girls. There seems to be no point to this when, unlike a sputtering Easy Bake Oven, video games seek to transform. When you play a video game, you become the character you’re given, or a faceless set of hands, or something outside of humanity entirely. You’re unbound by gender and what your peers could think of you if you were, for example, a little boy too nervous to ask his parents for a doll.

You don’t have to worry about what people think when you’re alone with your Nintendo DS. You can identify with Barbie while you dress her up, or an unseen chef trying to make their Cooking Mama proud. Despite marketing efforts, the soothing repetitiveness of these games could be enjoyed by anyone, and their lasting cultural relevance proves that they were.

And by making women’s work the focus of a game that you, presumably, want to succeed at, these games establish traditionally feminine work as something that can be difficult and tricky in addition to rewarding and fulfilling, just like any other job or more “masculine” Call of Duty campaign. Anyone can do “women’s work,” and everyone wants to feel valued once they complete it.

But women in the U.S. are still inadequately paid and treated for the vital work that they do. These games from the 2000s haven’t prevented this current reality. But, still, I’m grateful for the importance and focus they place on women’s work, especially if they remind us to remember the women outside of them. They’ve always been there, working, caring, ready for someone to pay close attention.