Fact: before people sat in front of televisions and manipulated things on the screen with joysticks, people sometimes sat around a table and played something called “board games.” I know, it’s difficult to believe, but it’s true. Today’s Xbox LIVE Arcade title, Wits & Wagers started life as one of these fabled “board games,” and the game’s publisher North Star Games sent me a copy to check it out.

Not surprisingly, the core of the game has remained the same — players place handwritten guesses to questions on a mat, and then everyone bets on whose answer is the closest (without going over) to the actual answer. Because all of the answers are numerical, actually being good at trivia really doesn’t factor in to how well you’ll do at Wits & Wagers. As the box says “Brainless Trivia, Shameless Fun!”

Last night, I invited a few people over to play both the physical version of Wits & Wagers as well today’s XBLA release (thanks Topher, Grrlaction, and Kev). How did they stack up against one another? Hit the jump for “Wits & Wagers XBLA vs. Wits & Wagers IRL.”

NUMBER OF PLAYERS
The physical board game version of Wits & Wagers requires at least four players, and can be played with as many as 20 people. It should also be noted that the game is suitable for playing around a large table, as well as bars on trivia nights, where you can drink. A lot.

The Xbox LIVE Arcade version of the game requires that you know absolutely no one — it can be played online against humans you don’t have to see and/or smell, or offline with AI opponents (who I swear cheat … damn you, AI Dave!). The XBLA version only supports up to eight players.

SET-UP
First time set up for the IRL version of Wits & Wagers was a bit of a pain. The box was wrapped in plastic (what, they don’t want people to steal this stuff in stores?), and everything from the betting chips to the question cards were also sealed up. I actually had to get up off of my couch to get a key that I used to slice open the packaging. You then have to lay down a map, and pass out chips and pens. There’s a lot of movement involved here.

The XBLA seems like it should be easier — I turned on the Xbox 360, navigated to the LIVE Arcade tab and launched the game. But I also had four people over, and I had to fish out those damned Scene It? controllers. The wire for the sensor bar was tangled up in the cords for my headset, and it spent a good five minutes. As you can tell, I’m easily frustrated.

ADVANTAGE: Tie; both versions can be a wicked pain in the ass to set up, although it has to be said that set up for the board game may be easier once it’s out of the package. 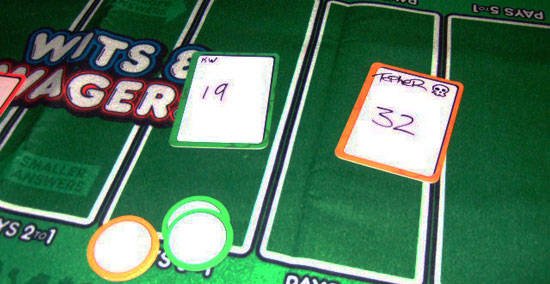 LEARNING CURVE
The rules of Wits & Wagers are actually pretty simple, and the physical board game comes with instructions that detail six steps to playing the game. Really, it’s not complicated, but the first run through may require you to reference the manual a few times. The game also requires a “banker,” someone who may have to understand how simple math and payouts work (the instructions do come with a handy chart to help you along).

The XBLA version has tutorial that you can choose to watch, but it’s likely you’ll go head first into the game and try to figure it out on your own. We played the board game first, so it was easier to pick up on how the game worked; my wife and I played the XBLA version a month or so ago — before we had played the board game — and it was still pretty easy to understand. The game will also do all of the math and payout calculations for you, so you won’t have to consult any instructions your first time though.

CLEAN UP
With the board game, you need to put all kinds of things back in plastic bags, fold up the betting mat, and then also clean up after your friends. The game also requires that you write your answers on cards with an erasable marker, which means you’ll need to have a tissue on hand to wipe off the answers between questions.

When you’re finished playing the XBLA game, you simply have to toss all of your controllers into a box and turn off your Xbox 360. No fuss, no muss. 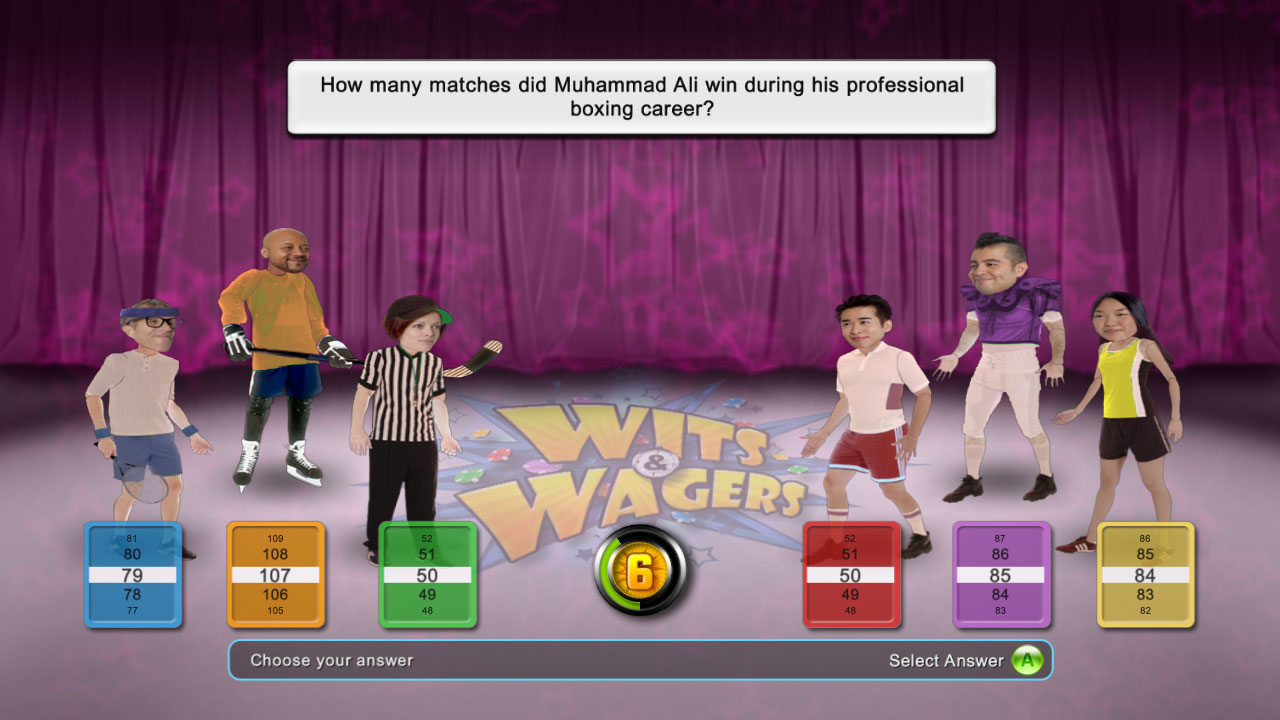 COST
The physical game retails for $24.99, and comes with 700 questions, enough for 100 games. The box of the game says that you can go to www.NorthStarGames.com and click on “What’s Coming Out Next?” to get more questions; at the time of this writing, I didn’t see any such link.

The XBLA game costs 800 MS Points ($10.00) and features 700 trivia questions, also enough for 100, games. And although it hasn’t been announced, additional question packs are sure to be offered for download through Xbox LIVE Marketplace in the future. No word on pricing or availability.

FUN FACTOR:
Here’s the important question, and it’s a tough one, because both versions can actually be a blast once you begin to understand how it’s played. It requires absolutely no real trivia knowledge to play, so even the brain-dead among you can participate without much trouble.

North Star Games suggests the board game version of Wits & Wagers be played with at least seven people, and can even be played in teams. We played with a small group last night and had a lot of fun, and I can imagine in a large, rowdy group things could get out of hand in a good way. We were a bit more subdued when playing the XBLA version of the game, even though we all agree that the ridiculous avatars you can choose are a plus.

AND THE WINNER IS …
By a hair, the edge goes to the Xbox LIVE Arcade version of Wits & Wagers, mostly because I’m too lazy to clean up after myself. In all honesty though, Wits & Wagers IRL is actually a better board game than Wits & Wagers XBLA is a videogame. Presentation wise (hilarious avatars aside), the XBLA game falls a bit short when compared to other titles available on the service.

I guess it comes down to whether or not you have friends … in real life. Both games are fun, and the fact that it requires zero knowledge of trivia might be a plus for some. but there’s no way a digital version of a board game can match the social experience of actually being with other human beings. Take that, AI Dave.