On Monday, the day every week I unleash these questions on the Destructoid staff, I posited there was no way Ed Boon and Netherrealm would reveal all the DLC characters for Injustice 2. “Surely,” I told myself “surely they would wait until the week of launch or after it was on store shelves.” That thought became my security blanket for the week after I asked the staff to name DC characters they want to be included in the season pass.

Then Thursday happened and my heart sank as it was confirmed characters would be revealed on Friday. I worried this would be my first week since I started this feature that I would fail to have a post ready.

Imagine my relief then when only a few of the characters were announced. Starfire, Red Hood, and (boring) Sub-Zero are there, as well as Black Manta and (boring) Raiden based on their obvious silhouettes. So that’s five of the 9 characters, leaving us with just four more. Four characters I hope to God are not from Mortal Kombat. I don’t know who they are, and some people have probably already figured out their identities, but I do know one of them should be Sandman.

Sorry Neil Gaiman but I’m talking the OG Sandman. Debuting in 1939, Wesley Dodd’s Sandman was part of the dark, pulp golden era of comic books. He wore a green suit, fedora, and a gas mask like a child straight out of The Doctor Dances. Like Batman, he was a skilled detective, could handle himself in a fight and didn’t believe in killing his villains, opting to gas them to sleep. He’s basically like Bill Cosby if Bill Cosby was a good guy.

Armed with a gas gun and tiny gas capsules, he would make for an excellent status effect fighter, putting his opponents to sleep or paralyzing them. If his occasionally used wire-gun is included, Sandman’s combat repertoire would grow even greater, creating someone far more interesting than Cheetah looks.

Mostly, I just want as many people as possible to learn about Sandman. In the same way Super Smash Bros. for Wii U & 3DS reintroduced the Duck Hunt Dog character to gamers, it’s time comic book geeks reacquaint themselves with Sandman. 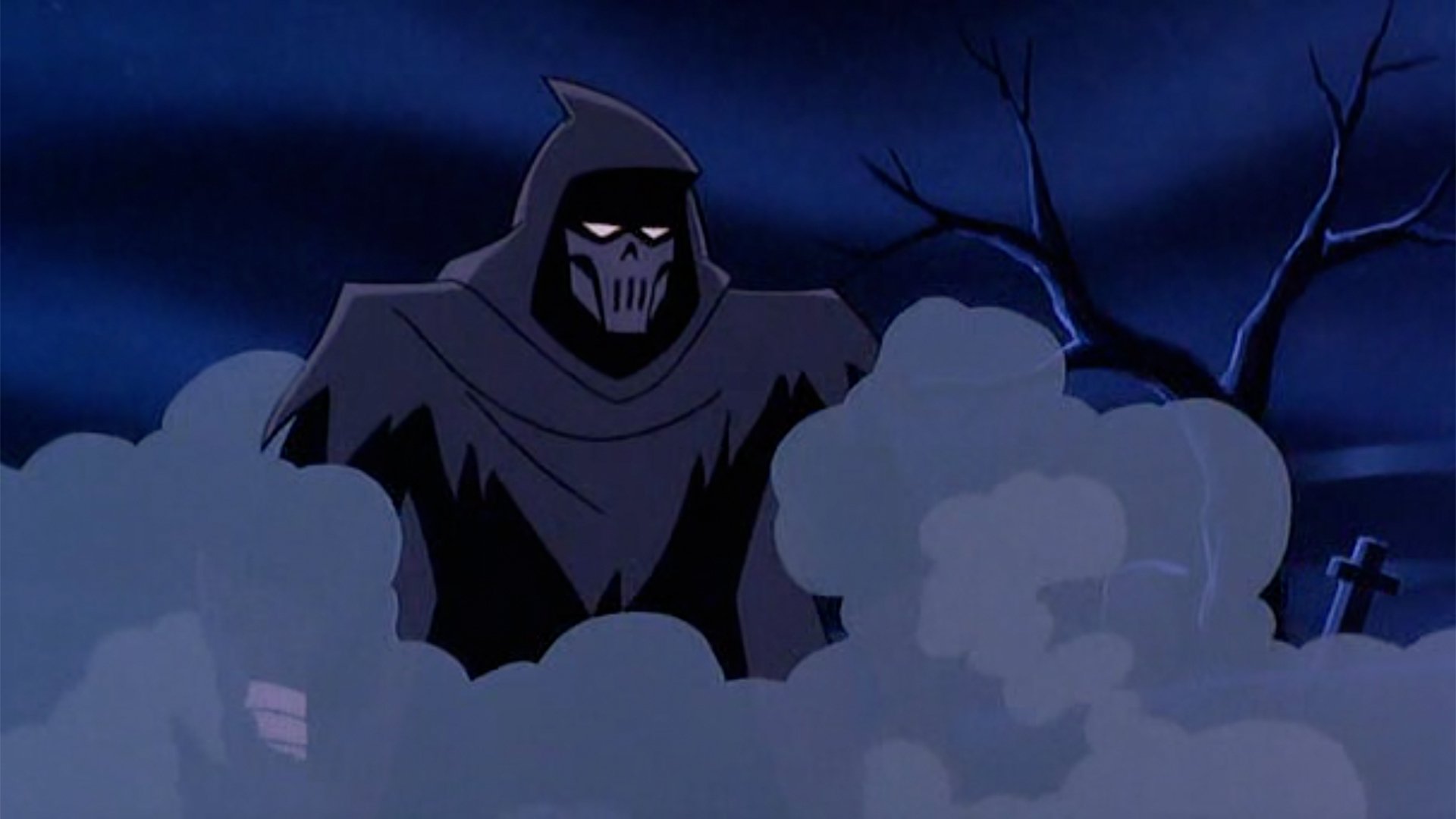 At one point the Batman Rogues Gallery was filled to the brim with perfect reflections of the hero’s fractured psyche. Now, we have characters like Condiment King. But as crowded as Gotham City has gotten in recent years, there’s still plenty of greats to pick from — and that list includes the Phantasm.

A staple of the strong ’90s era of Batman, Phantasm, also known as Andrea Beaumont, was a badass villain that had an even better look. An invented scythe gimmick (with the existing blade hand)would fit right into Injustice 2‘s weapon-based combat, and the dev team can give her any number of gadgets to rival Batman’s kit without being a straight clone.

She’d also nicely slot into the story if that was an option. Oh, and she should come with a free 4K remastered copy of Batman: Mask of the Phantasm, one of the best Batman movies to date (including live action). A man can dream. 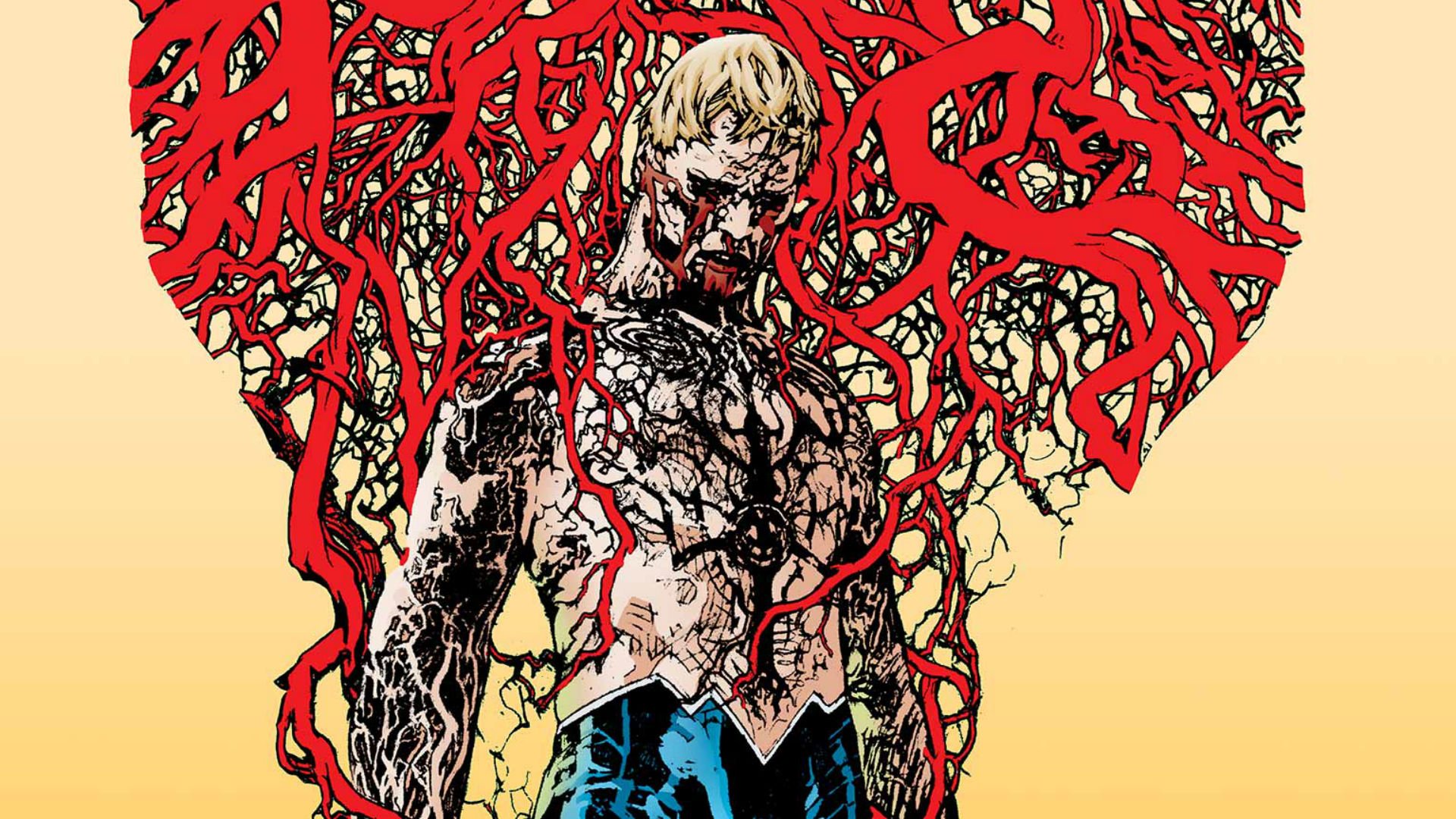 Since Ceej clearly doesn’t understand how DLC works and picks the most obscure character imaginable, I’m going to double down on that with my pick: Animal Man. If the protector of the Green, Swamp Thing, is here then it only makes sense the wielder of the Red, Animal Man, gets his due. Multiple runs with the character have included fourth-wall breaks, psychedelic colors, post-modernist views of comics in general, and animal rights advocacy thrown in for good measure. So there could be potential several ways to include Buddy Baker into the Injustice universe.

With his ability to borrow power from animals (Vixen could be included too, so pretend she’s also my pick), as well as The Red’s endowment of energy beams and such, he could have a great move set. But this probably won’t happen as much as I want it too. One of Buddy’s more identifiable characteristics is how non-traditional of a superhero he is. Often fighting sans costume, or refusing to fight at all, NetherRealm would have its work cut out for them.

Given that they’re both developed by the same team, Injustice and Mortal Kombat have a lot of similarities. The problem is, unlike the Mortal Kombat games that preceded them, the Injustice games are both rated T for teen. That means that none of Mortal Kombat‘s wanton murder and gore made the cut. DC is probably worried that the image of Wonder Woman ripping out Superman’s intestines and dancing around in his blood might tarnish their image a smidge. That said, they have Superman breaking people’s necks now, so it’s hard to say.

If this is ‘censorship’ on DC’s part, adding Captain Carrot to the roster of Injustice 2 is one way to get around it. He’s based in the same reality that Bugs Bunny and Roger Rabbit hail from, meaning that you can flatten him with an anvil, shoot a giant hole in his chest, or even decapitate him, and he’ll be fine a few frames later. Including him in the game would allow all the other Injustice 2 fighters to have one Fatality each, that could only be performed on poor Captain Carrot.

Don’t feel too bad for him though. He feels no pain, he’s about as powerful as Superman, and he’s dating a sexy poodle. As long as he gets to eat one of his power carrots every five minutes, he’ll always be just fine. 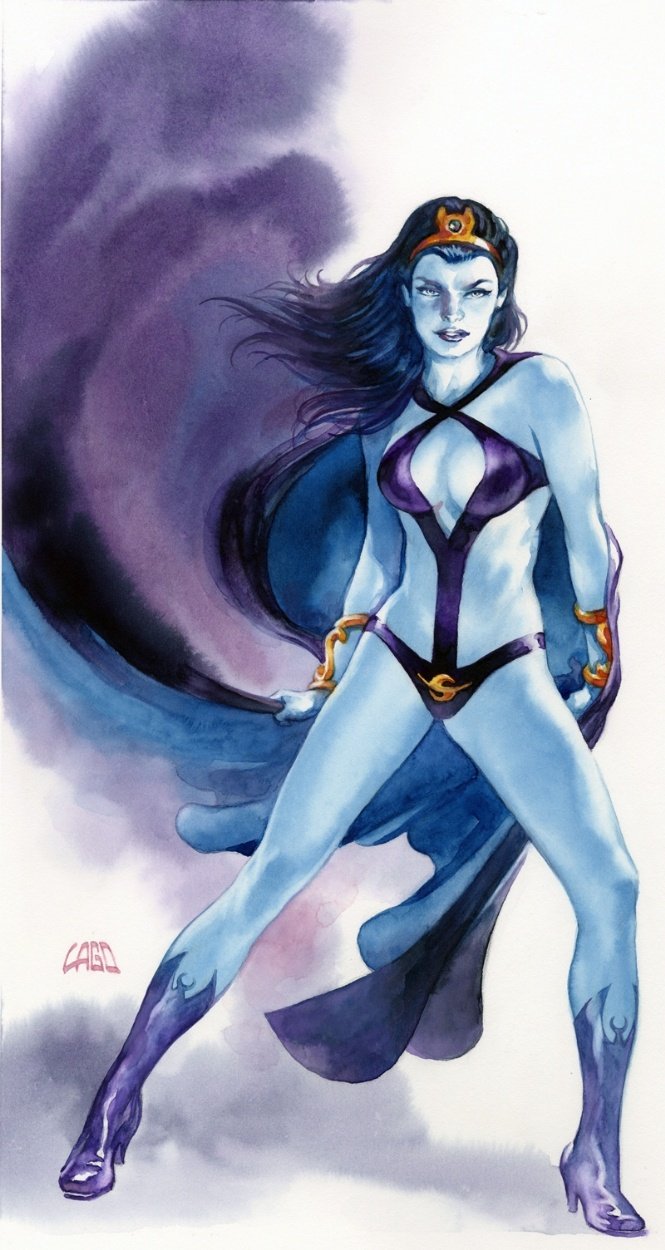 Like every single DC character, Shadow Lass is an alien with a goofy name and a home planet with an even goofier one. After getting hit in the head with a radioactive Cure CD in the Hot Topic she managed part-time, this ordinary goth chick gained the ability to harness darkness to forge weapons and envelop foes in nothingness. Essentially, she can use shadows to kick your ass.

Since roughly 77% of Injustice 2’s roster uses either guns, ice abilities, or guns with ice abilities, a badass goth chick slapping Superman’s dorky ass around with a baseball bat made of pure darkness sounds like a reprieve from the game’s mostly-safe roster. Obscure to the point of parody? Probably. Better than the abomination that is this game’s Joker? Most definitely. 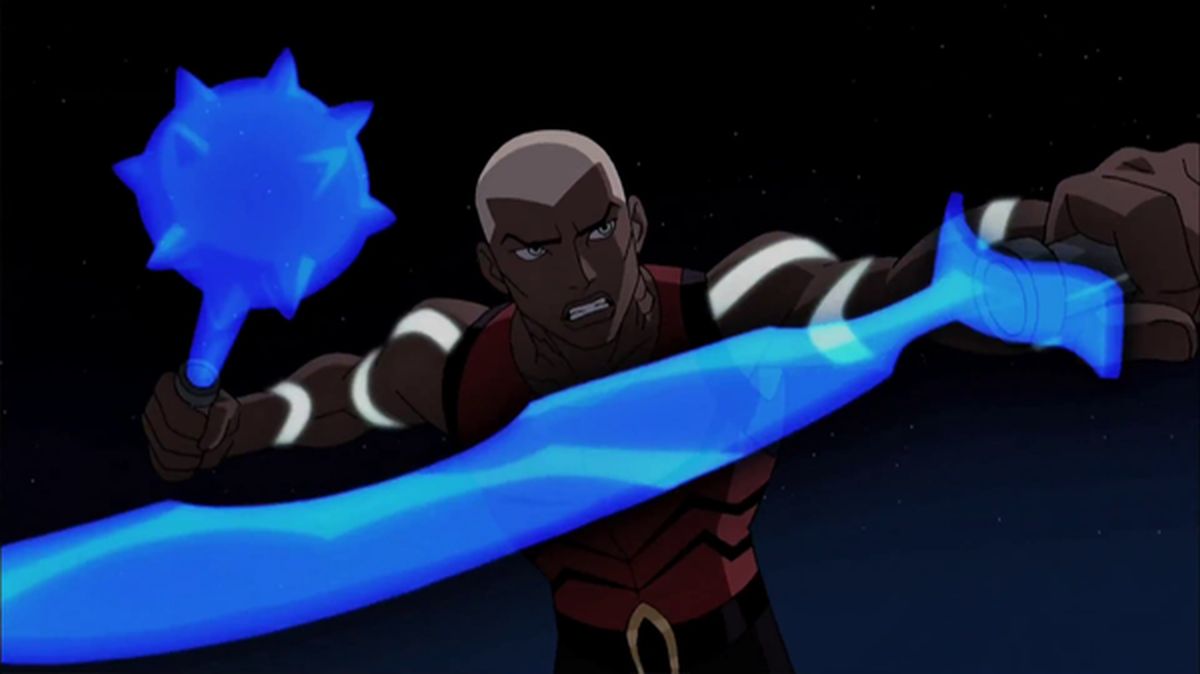 The long-standing notion that Aquaman is super lame has been getting a little push-back recently. Increasingly often I see people argue that he’s actually very powerful when he goes all out. Be that as it may, the “Aquaman sucks” belief is still widely held.

No such qualms exist about Aqualad, in his Young Justice incarnation. Despite being an original character for the show, Kaldur’ahm quickly proved a break-out hit, and it’s easy to see why. He’s a guy who keeps his head cool, leads by example, and easily manages to outdo even Robin in leadership skills. He’s the man who keeps the team together.

Oh, and he’s basically a Waterbender.

Aqualad’s preferred fighting style of creating hard-water weapons on the fly would be a perfect fit for Injustice. From whips to maces to swords, he has the whole package. Pair that with more straight-forward examples of Waterbending such as waves or giant water dragons, and the miscellaneous skill of releasing electric charges, and you’ve got a character that could easily go toe-to-toe with the rest of the cast. 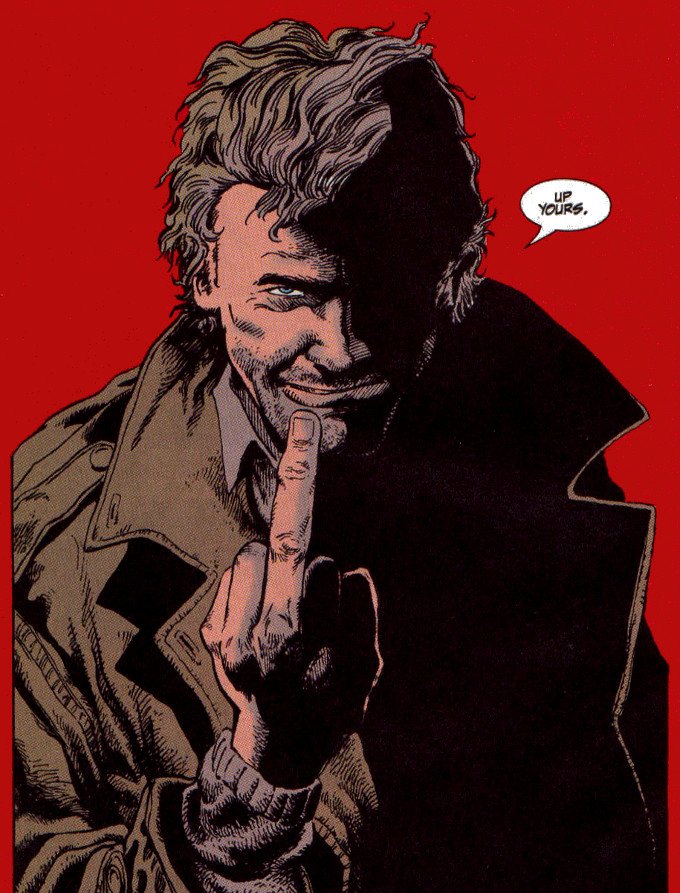 John Constantine, the Hellblazer. He’s equal parts magician and bullshitter. On a first name basis with most of Hell and willing to get his hands (and soul) very dirty in order to help a friend or save his own ass. He’s also one of my favorite comic book characters ever. So when I think about who I would like to see playable, I think it would be funny to see Constantine mix it up. John’s not a fighter in the traditional sense. He’s more of an opportunist. So his play style would probably be some kind of combination of Blackheart from Marvel meets Dr. Fate. Lots of ranged attacks and traps. Oh, and he would have to have a Silk Cut cigarette dangling out of his mouth no matter what.

It wouldn’t make a whole lot of sense but hey, if Joker can fight Superman like that’s a thing, why not have Constantine in there? Plus the potential for his super would be great. The Hellblazer comic painted a very vivid image of what Hell was like and sending your opponent to meet the Fuck Pig would be extremely satisfying. 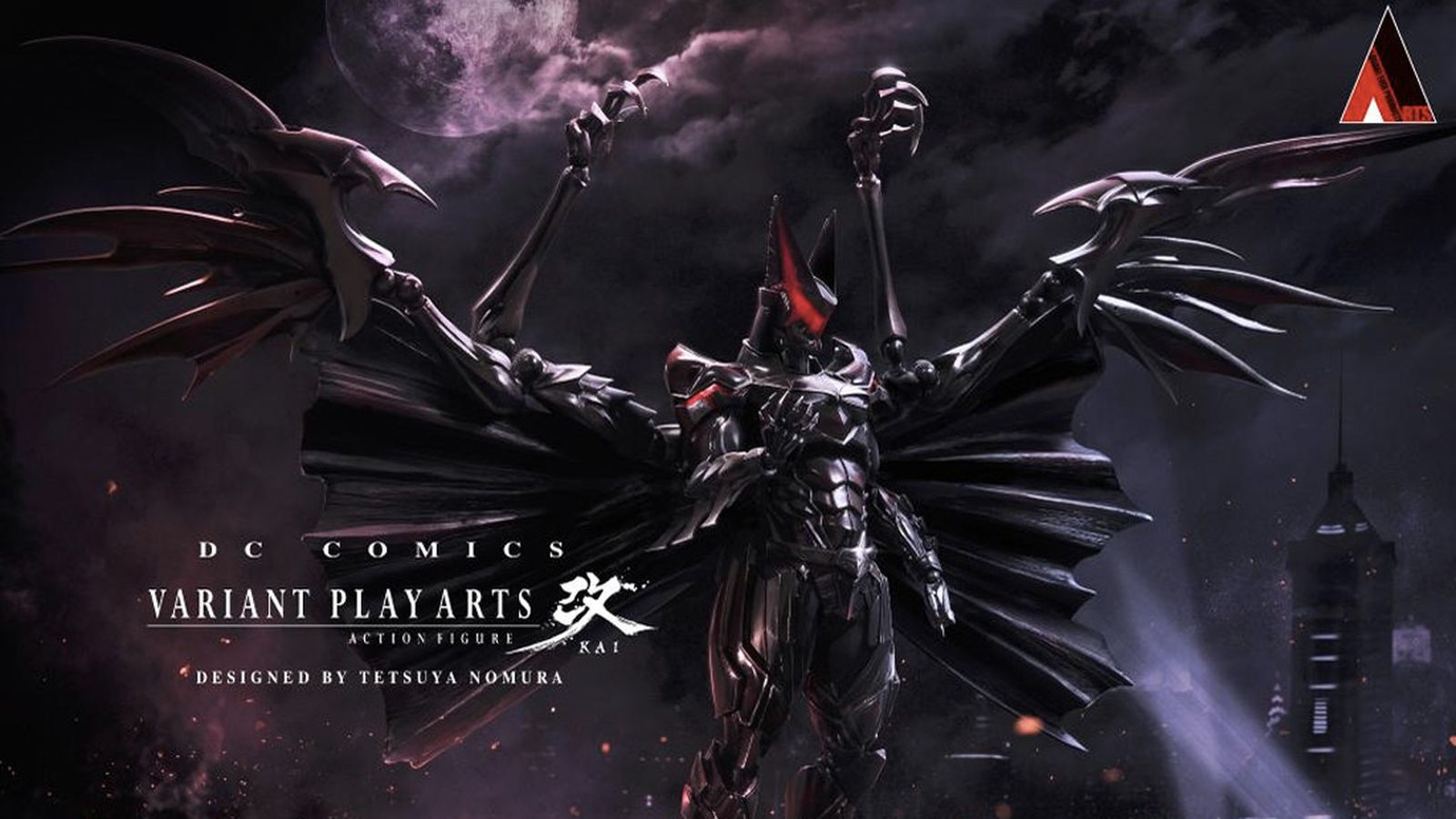 Back in the days when you were only allowed to read one company’s comic books, I was more of a Marvel guy, which means I don’t know much about DC beyond stuff the Justice League cartoon. In fact, most of the DC people I’ve heard of are already in Injustice, which leaves me with no choice but to cheat and ask for a variation of an existing character.

I’m talking about Tetsuya Nomura’s amazing redesign of Batman. This is far from a mere additional skin, like the way you could dress up Arkham Knight characters. The extra arms and general hugeness mean that Nomura Batman would play like a totally different character from regular-ass Batman. If anything, he might play a bit like that time “Batman” was actually a normal cop driving a Gotham Police Mech suit. 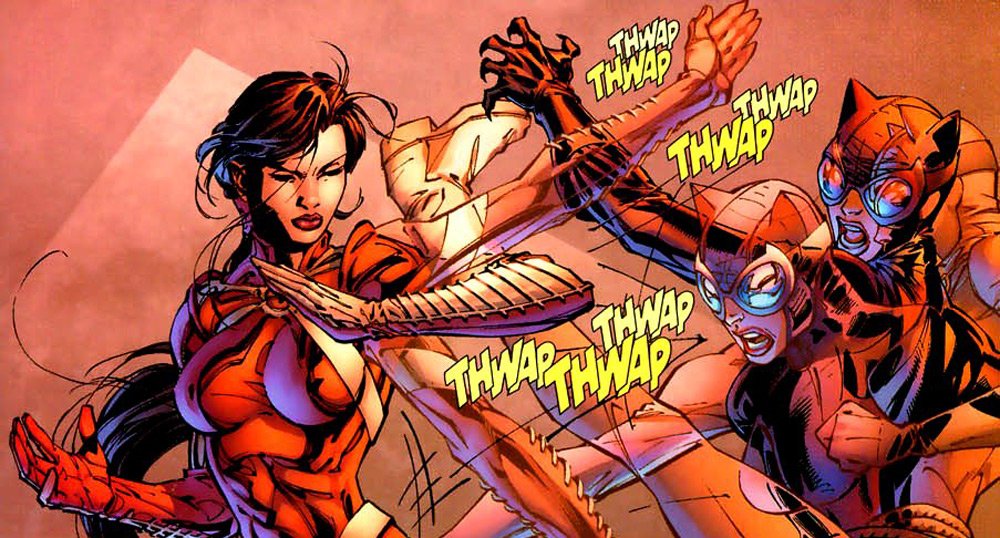 Who do I want in Injustice? Better question is why Lady Shiva Woosan isn’t already in this series. She’s an A-list Batman villain who is criminally underutilized in video games and she revels in killing opponents in hand-to-hand combat, so she’s a perfect fit for this game.

She’s a grandmaster martial artist that even Batman has admitted may be his equal or better in terms of skill. It’s why he came to her when he needed to be physically rehabilitated after Bane broke his back. He may not like that she is a killer that enjoys stepping on necks, but he respects her as a combatant.

She also trained in the League of Shadows, trained Tim Drake, gave birth to best Batgirl Cassandra Cain and has worked with the Birds of Prey on her good-girl/not murdery days.

She’s clearly qualified, plus I want to see her kick the crap out of Joker. 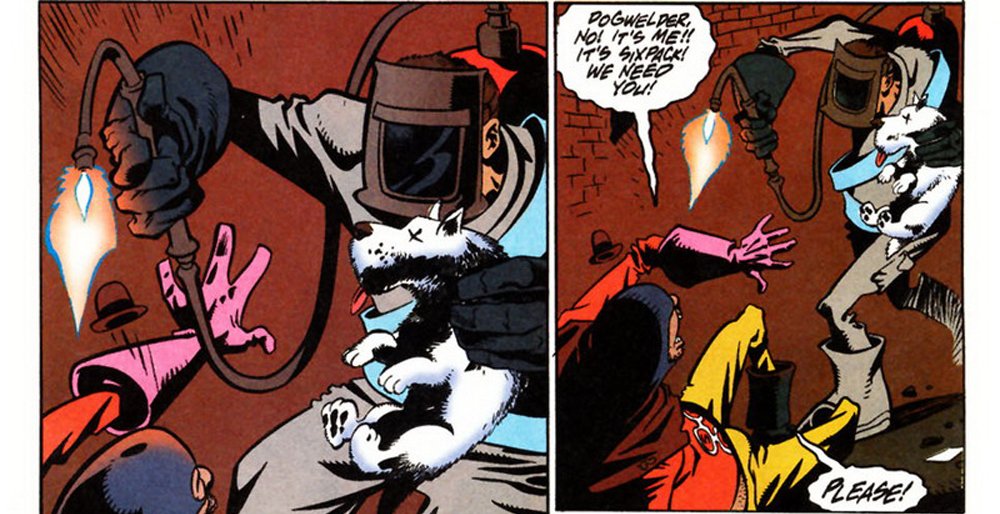 All heroes and villains way more interesting than another goddamn Mortal Kombat character.