A week or so ago I drove through Hell Niño in Los Angeles to get my hands on Tom Clancy’s The Division in a 2002 Dodge Neon with bad windshield wipers. Let no one ever deny that I am committed. Alongside Ubisoft reps, other media folks and I played through two separate segments of the game on the Xbox One, each lasting about an hour.

The first chunk was fairly early on in the campaign. New York had already gone to shit, with flamethrower-wielding goons called The Cleaners torching anyone infected by a weaponized virus. A Ubisoft rep, another member of the press (can’t remember your name, buddy, but our time together was sweet), and I all were playing as members of the titular Division, sleeper agents who had been activated after Black Friday, an event that decimated most of the city’s population. First, we used the character customization tool to make uncomfortable approximations of our own visages (or just made attractive women with one perfectly-placed scar to prove that we aren’t sexist). Then we started on the snowy streets, getting our bearings and learning how to fire our weapons, customize them, and take cover so we could kill the Bad Men (read: poor folks scrounging for supplies so that they can continue to survive).

Cover is the main thing that doesn’t share the uniformity present in other shooters: when looking at a car or fence to hide behind, you can see the path that your character is going to take, and a small button prompt shows just how long it will take to close the gap between your person and that life-saving wall. Like Gears of War before it, The Division is granted an almost puzzle-like feel when you’re planning to flank enemies or sneak around them. In fact, despite being able to put multiple attachments on my death-bringing machines and the various skill trees and perks that make killing easier, I enjoy the tactile sense of movement in this game more than anything else.

Even early in the game, there are quite a few options that assist in your eradication of the homeless and disenfranchised. (I jest; some of these factions are “evil” militia uprisings). Using three different hotkeys, I could place turrets, launch sticky bombs, and scan the area for enemies using those dope contacts that Division agents get to have. The only problem here was that only half of the abilities decided to work: for instance, the hotkey that was supposed to place a turret often led to my agent crouching for a moment and tapping the ground assuredly, which isn’t exactly effective in the heat of battle. 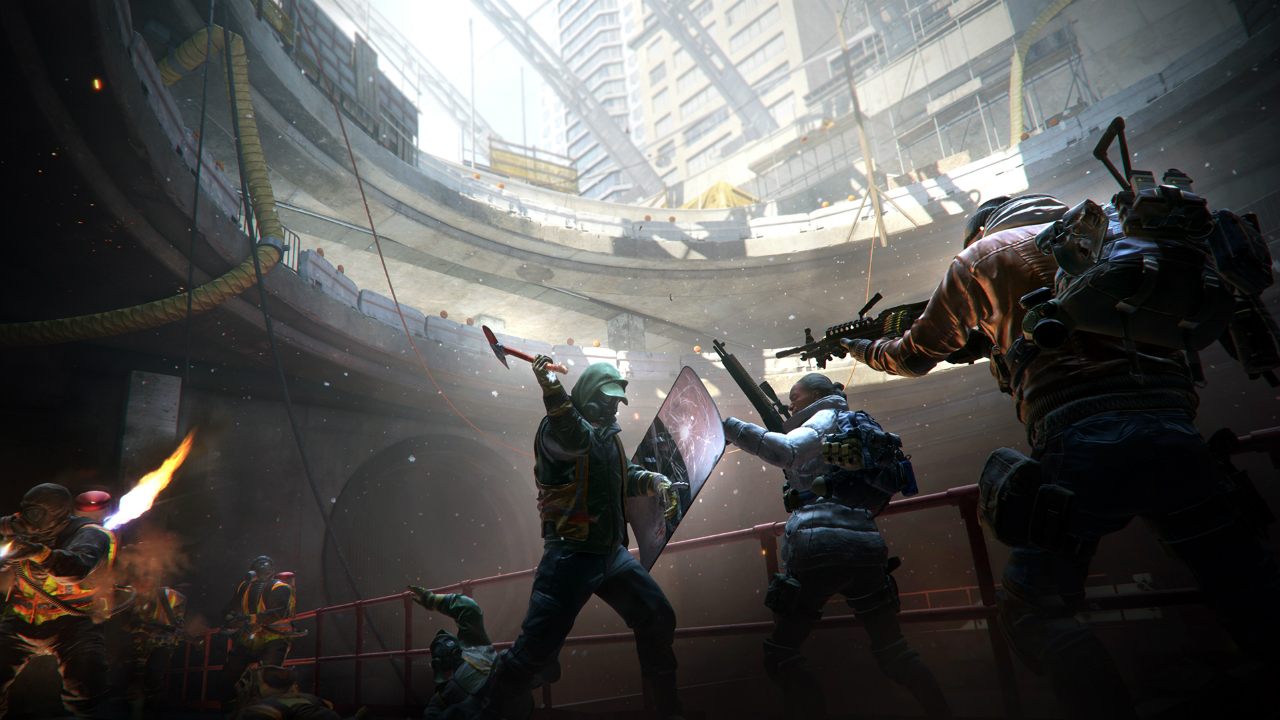 When the abilities work, they bring a satisfying immediacy to the numerous skirmishes you are wont to face. If you time your cooldown to finish right as a boss appears and you can pull out a ballistic shield to charge him with, it’s hard not to smile and high five your co-op buddy. From what I was able to see, there’s a plethora of mods and perks you can use to modify both these abilities and your agent’s stats, which could lead to diverse character builds later on down the line. Combined with the crafting system and customizable weapons (grips, scopes, magazines, the usual), there will be plenty of viable options in your quest to purge New York.

Throughout our various missions, we improved the three wings of our own bases of operations: Security, Medical, and Tech. Whether we were scrounging up supplies to bolster these facilities or rescuing more personnel with which to staff them, we ended up earning more perks, mods, and weapons. These missions mostly involved finding an area or killing a target, but they were fun to tackle with newly-made friends. We never had to think too hard about anything, but that’s not what this game is about. It’s going to scratch that same Destiny itch, where you’re comparing stats and finding more efficient ways to run through quests.

Here’s the main problem: like most Diablo-esque shooters that are thigh-deep in weapon stats, developers tend to use enemy health as their most important slider. If you get a better gun, the guy who’s wearing a hoodie and shooting you with an uzi will just have more hitpoints. He’s an elite, so be prepared to fill his head with bullets for a good ten minutes before he drops. This is an old problem that you’ve heard about before. But in a game like The Division that really wants you to buy into a semi-realistic what-if scenario, it’s hard to believe that a guy who did enough push-ups to reach level 20 can swallow multiple magazines of ammunition. Yes, AI is hard to improve, but damage sponges aren’t fun. 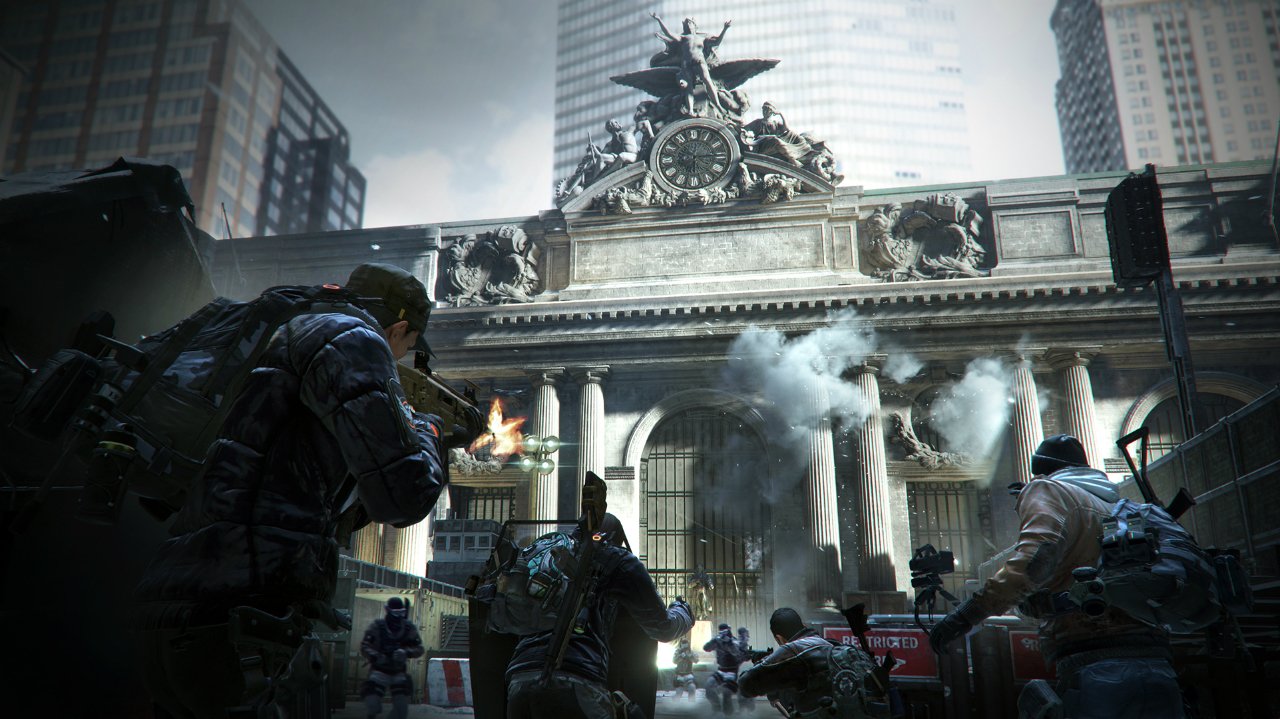 This was especially apparent when we skipped to a much later scenario when we had better weaponry and skills. Soldiers that used to fall quickly could now shrug off a hailstorm of metal and fire, yet we seemed to take damage at the same rate as the beginning of the game. It all feels rather Uncharted when you’re standing next to a man, firing bullets between his eyes, watching him recoil, righting himself, stepping left, and shooting you some more. Most developers would love to have their game compared to Uncharted, but this aspect isn’t a selling point.

At the end of the day, I don’t expect The Division to set the world on fire, but I didn’t expect Destiny to keep growing and become the zeitgeist that it has. Serviceable combat, an encyclopedia worth of customization, and cooperative elements are enough for me to want to jump back in with old friends. With some more fine-tuning, this’ll be a good late-night game for you and your pals. Plus, the Dark Zone areas seem promising (Joe said everything I would here). Hopefully, we’ll all be able to place turrets when it releases on March 8, 2016.