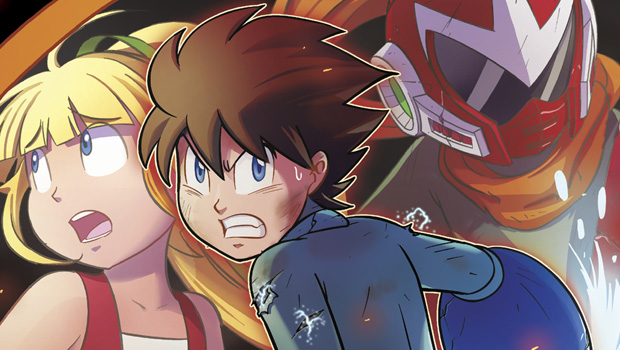 This month’s Archie Mega Man issue ends with all technology on the planet shutting down. Planes in mid-flight plummet towards Earth, hospital monitoring equipment ceases to function — we’re talking an apocalyptic scenario here. The only Robot Masters still functioning are Wily’s, which the alien supercomputer Ra Moon has chosen to spare to serve as his army from now on.

Obviously, Light manages to reboot Mega Man somehow, because we wouldn’t have a comic otherwise. I’ve shared the covers for the “Blackout: The Curse of Ra Moon” story arc up through issue #31 previously, and now I’ve got the art for #32 as well. As you can infer, Wily has decided to put his vendetta against the planet on hold to combat this greater threat. His Robot Master army now back under his command, he and Mega Man will take Ra Moon on in one final showdown.

Issue #32 is quite a ways away — December, in fact. Enjoy the standard and variant covers in the meantime, and check the full solicitation below.

“Curse of Ra Moon” Part Four: The startling, jaw-dropping conclusion to this MEGA-EPIC story is here!  The tables have turned as the evil Dr. Wily and his sixteen Robot Masters stand shoulder-to-shoulder with Mega Man! But the ominous alien known as RA MOON still threatens the lives of both the heroes AND the villains! Who will survive and what will become of them? Can their combined power overcome Ra Moon? One thing is certain—there’s no way our hero will be walking away from this one unscathed! Featuring an all-new cover art from Mega-art-guru Patrick “SPAZ” Spaziante and an awesome new “payback” variant cover from artist POWREE (Sandra and Woo)!