There have been plenty of rumors and bits of information about Dota 2 making an appearance at gamescom in the past week and beyond. Between Valve’s hints at the upcoming title here and there, its presence at gamescom, and talk from the world’s top DotA players about a gamescom Dota 2 tournament, it sure sounds like the game will make a showing at the Cologne gaming event.

But rumors abound on everything Valve does, and rumors are just that: rumors. So let’s take a closer look at what we know and how likely it is that Valve will be showing off the new MOBA title during the world’s biggest gaming event.

In the announcement about Steam’s new content system that is meant to make it easier to update and publish games on its digital distribution service, there was a mention of Dota 2. More specifically, all Valve said was: “Soon, Dota 2 will be delivered using it.”

Since we already knew Dota 2 was coming, and since whenever Valve mentions anything related to time you have to take it with as many grains of salt you would get if you evaporated the Dead Sea, that doesn’t tell us much. “Soon” itself can mean anything between a week from now and Half-Life 3‘s release. It’s a safe way to try and hype up fans of the original game, and fans of the MOBA genre itself, while keeping the option open to release it any time they deem the game to be ready.

On the gamescom website, Valve’s profile page lists a single genre: Strategy. Dota 2 is indeed a strategy game, and unless we are getting a surprise announcement about Half-Life Wars or Team Fortress Commander, it’s likely enough that it will be Dota 2.

Moreover, Valve will be present in both the business area, where all of the press demos are being shown, and in one of the public expo halls. Its booth in the public area is nothing to scoff at either. Each of the public expo halls is huge, roughly 75% the size of PAX Prime’s main expo floor from what I recall, and there are three of these halls at gamescom.

Valve’s public booth is almost as large as Activision’s booth, and would easily fit a podium, a giant screen, and probably enough PCs to let people play at least two games of 5 vs. 5 Dota 2 at once. Valve’s presense in the business area is not as big, but large enough to keep a game of Dota 2 going.

Chinese Dota 2 fansite Sgamer posted a letter that was said to come from Valve, in which Gabe Newell invites a Chinese gaming commentator Yan Zou (Sisi) to the “Dota 2 International Invitational during” gamescom, together with other commentators DC and Wizard. Not only does the letter mention that Ms. Yan Zou is recognized for being an important member of the interational “DOTA” community, but the wording suggests she’s been involved with “the planning and preparation for the Event” already.

ZSMJ of team LGD told GosuGamers in an interview that LGD was one of the Chinese teams to receive a similar invitation, although they are working out some visa issues to be able to make it to Cologne. You don’t go through the process of getting a visa in China if you can help it, unless you are a glutton for punishment, so there’s that as well.

Another player, MYM, mentioned in a stream that he was invited too. And so have other teams, according to various DotA fansites like this one. Supposedly the best teams in the world have been invited by Valve, including 6 teams from Europe and 8 teams from Asia, and there is $80,000 worth of prize money to lure them to Germany. 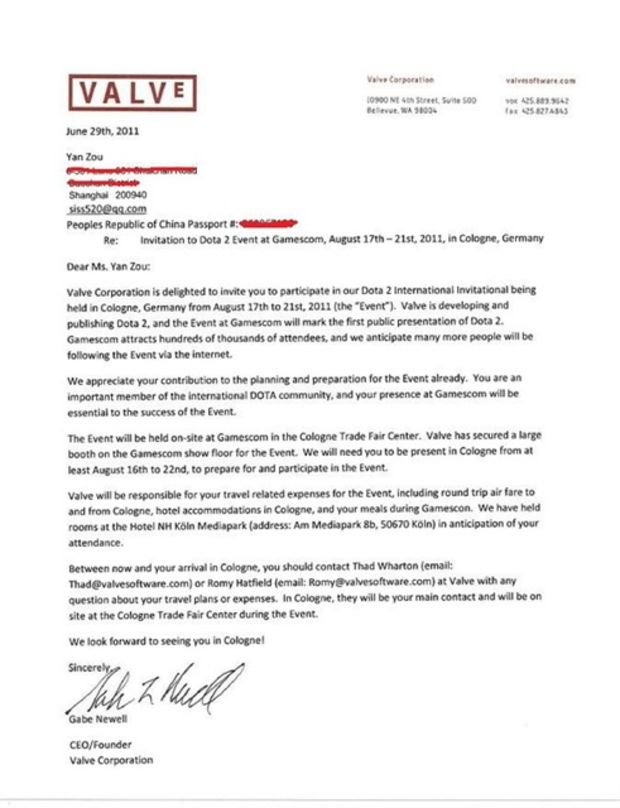 But how legit is that letter? A couple of things stand out. The color of Valve’s typeface matches that of Valve’s business cards for one, where email addresses and phone extensions share the same kind of brownish color as shown in the letter. Valve also names the game Dota 2, just like it does in all official statements about the game.

The hotel mentioned in the letter is indeed a hotel in Cologne, if not exactly the closest one. But as a 4.5 star hotel, it’s not too shabby either. It’s not the best hotel in Cologne or the best one near the Kölnmesse where gamescom and GDC Europe are being held, but it does the job if you want your players to feel comfortable and relaxed while being close enough to the city center for some nights out.

Furthermore, you wouldn’t likely cross out your address in such an amateurish way and leave your email address intact (QQ is basically China’s Yahoo), unless you were just really excited about getting that letter and posting it online. The letter concisely notes that the Dota 2 International Invitational lasts from August 17th to August 21st, and later notes that at least this person needs to be present in Cologne from August 16th to August 22nd. Jet lag and all, and maybe a morning start for the Invitational. You don’t really write this way if you are making a fake letter, unless you have some experience with that style of written communication.

Valve does name DotA as DOTA, which it tried to trademark much to Bilzzard’s chagrin. It also names gamescom as “Gamescom” but then again every single website and press release on the planet seems to get the official name wrong. Everywhere you look you can see GamesCom, GamesCon, Gamescom, or typo variations of the kind. Admittedly, “gamescom” is a bit of a dumb name to use in written text if you want to focus on the name of an event, even if it looks nice in a logo. 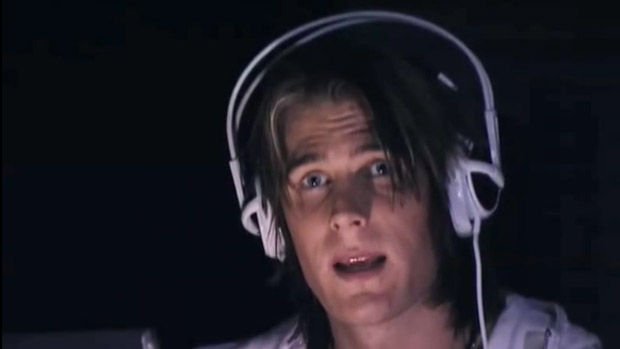 So will there be Dota 2 at gamescom?

It looks like there will be. While letters can be faked, unofficial comments from players are hardly solid proof, and just mentioning the Strategy genre doesn’t mean it’s Dota 2, all things combined the evidence at hand suggests that Valve is planning a big event during gamescom with press showings to match it.

We’ll be there with a large contingent of Destructoid’s European community, so keep an eye out for more details and footage of Dota 2 and gamescom in less than a month from now.