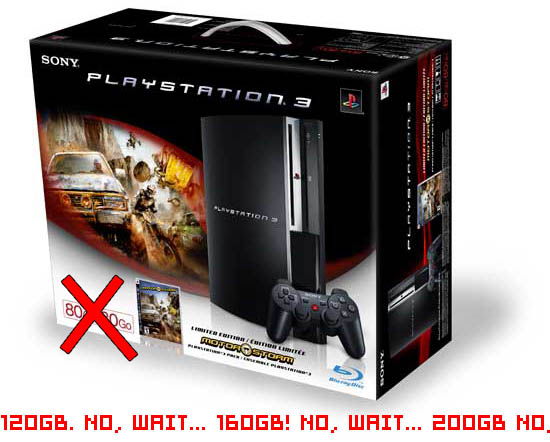 A few days back we heard that Best Buy is dropping the 80GB PS3 model in their stores. That kicked off all kinds of wild speculation, and an analyst even chimed in, but now some new rumors point to two new models of PS3 in the works.

Ars Technica’s highly accurate mole is on the case again, and he says that we can expect news SKUs with a sizable storage size increase in the future.

“Sony is, in fact, phasing out the 80GB PS3. Sony is going to stay with the two-SKU approach though, and the prices look to stay the same,” the mole told Ars Technica.

“The Spiderman 3 pack-in will disappear as well once the 80GB unit is gone. In order to maintain a similar value proposition to the 80GB/Spiderman 3 bundle, I expect to see a storage increase to 120 or 160GB at the same price point, plus the new DualShock 3 controller.”

Silly! If this is true, Sony must be going after the Most SKUs Ever for One Console award. If the price does stay the same, I guess we can’t complain too much.

What do you think? Can we rely on AT’s mole again? Do we really need bigger hard disks in our PS3s? Are you tired of waiting for the DualShock 3?