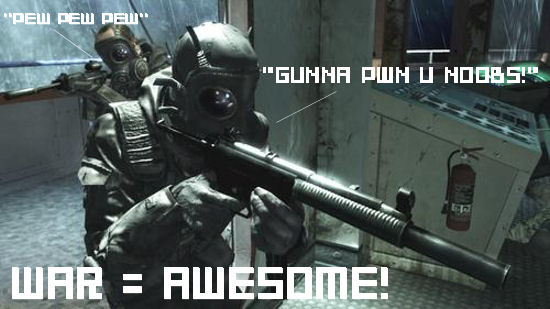 It has been said that war games trivialize real war, reducing it to spectacle and throwaway entertainment. No different from the mainstream news, really, but it’s videogames that are the scapegoat because, well, they’re videogames. In preparation for its release, an advisor for Call of Duty 4 pre-emptively denied claims that videogames cheapen war.

“I think it draws some awareness to the issue, and in the case of World War II games, I think it taught history,” said Hank Keirsey, a military veteran and advisor for the Call of Duty series. “There are kids who would never have any interest in what their great-grandfathers did before they died, but they’re compelled to get on the phone and say, ‘Dad or granddad or great-granddad, I just played this game. I’ve talked to my mom and she said you were in that fight somewhere. What weapon did you carry? A Thompson?’”

He makes a good point. I myself have been educated in history and gained new worldly interests thanks to games in the past. Of course, with Infinity Ward’s latest being brought from the World War II era into a modern age, expect to have such ideals ignored should people bemoan games cheapening the so-called “plight” of men and women who willingly signed up to do the job they’re doing — because a soldier actually fighting is just such an unheard of, insane thing.

I only have one question — how could a videogame or, indeed, anything, trivialize war as much as war trivializes itself?

Filed under... #Call of Duty#Debate#War