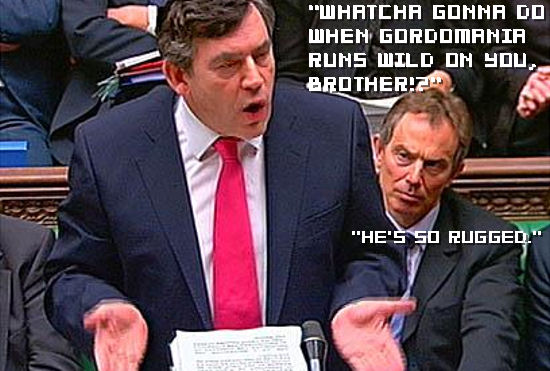 It has today been reported that fears are arising over the possibility of aggressive anti-videogame movements from Downing Street, following the soon-to-be-published Byron Review. The report, written by TV psychologist Tanya Byron, studies the effects of videogame violence and should hopefully aim to be an unbiased look at what videogames are. Ominous words from Prime Minister Gordon Brown have now sent a shiver down the collective spine of the UK games industry:

“A Whitehall leak … suggested that Brown was ready to introduce an aggressive ‘crackdown’ on violent video games in the wake of the Byron Review, which will recommend the introduction of BBFC ratings for all software titles when it is published next month.

Brown’s choice of rhetoric has got top publisher, retailer and development bosses concerned – not least because Byron has won industry-wide praise for her open-minded approach to her task.”

An unnamed source within the games industry has confirmed to MVC the “definite fear,” that Brown’s terminology has injected. The worry is that Byron’s report, as fair and even-handed as it could be, will be spun and used as a PR weapon to aid Brown’s appearance at the expense of videogames.

Thus far, Gordon Brown has impressed me with his moderate approach and apparent sensible outlook on more than just games. Given what he’s said thus far, I would hope that Brown isn’t going to suddenly turn aggressive on the games industry. He once spoke of all parties involved working together on equal terms. Use of the words “aggressive crackdown,” certainly seems a departure from his friendlier statements. It remains to be seen how Brown uses the Byron report, but we don’t have a long wait to find out.