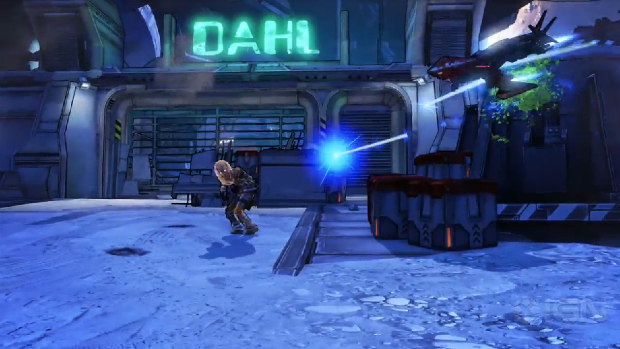 Since its reveal, we have known that the four playable characters in the upcoming Borderlands: The Pre-Sequel would be Athena the Gladiator, Wilhelm the Enforcer, Nisha the Lawbringer, and Claptrap the Fragtrap. Up until now, we have only seen Athena in action, with her Captain America-esque shield.

Capping off its week of coverage, IGN showed off Wilhelm’s special ability, and it should not surprise many who fought and killed the cybernetically-enhanced henchman in Borderlands 2. Wilhelm will be able to summon two Surveyor drones; Wolf is built for assault while Saint is meant more for defense and healing.

The footage shown focuses on Wolf, which differs from Gaige’s Deathtrap robot in that it appears to have better artificial intelligence, following the player around and focusing fire on Wilhelm’s targets rather than just going for the nearest enemy.

Only one of Wilhelm’s three skill trees (Hunter-Killer) is shown, and most of the skills highlighted pertain to Wolf. To take a step in the direction of speculation, I expect Wilhelm’s second skill tree (Cyber Commando) to focus largely on buffing Wilhelm himself, and will relate most strongly to him becoming the cyborg we see in Borderlands 2. The final skill tree, whose name is illegible, probably powers up Saint and specializes in defense.

Hopefully 2K lets us see the full skill trees of all four characters in Borderlands: The Pre-Sequel soon. We need some time to start calling dibs, after all.

The New Skills of Wilhelm the Enforcer [IGN]