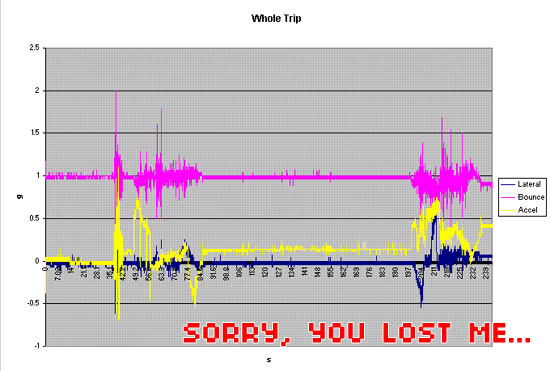 There is a lot of technology in the Wii Remotes that we regularly wiggle around. While we were busy aiming for headshots and curveballs, one clever auto enthusiast figured out a way to use the Wii Remote to calculate G-forces and acceleration times. I’ve never felt so stupid!

VW Vortex is a web site for Volkswagon enthusiasts, and member klee did the fancy math and hacks to use the Wii Remote’s accelerometers to measure his car’s performance. He combined the Bluetooth accessibility used in other Wii hacks with some software, drivers, and clever scripting to create the system that could gauge his car’s 0-60mph times. All of this data was processed in Microsoft Excel, and now you can see graphs and charts of his Jetta’s performance.

In his post, klee admits that the results are not super-accurate, as the Wiimote gives G readings rounded to two decimal places, but it’s pretty amazing that a gaming controller could be used for this kind of purpose.

If you’re one of those big-brained people, hit the jump to see technobabble.

I got this idea after seeing some physics class use the wiimote in some kinda pendulum experiment.

Why not use the wiimote’s built in 3-axis accelerometers to measue g-forces, acceleration and even calculate my own 0-60mph times!

So I did. I wrote a script to dump all the g-force readings from the wiimote to a comma separated value file, then did some post processing in MS Excel, and voila, I can see every bump, every curve, my acceleration and braking, and even calculated my current speed using high school physics (v=a*t)

I admit, it’s not super accurate since the wiimote spits out G readings rounded to two decimal places. It also provides other acceleration readings in finer granularity, but I couldn’t figure out what metric it was recording in. I used Gs since I knew it was just the acceleration of gravity (9.8 m/s/s).

Here’s a copy of the script that dumps everything out to output.txt
All you need is Glovepie v0.29, a Bluetooth dongle with BlueSoleil, the Human Interface Device drivers, and a standalone wii remote!
All the basic instructions on how to get your wii remote connected to your PC can be found here:
https://www.wiili.org/GlovePIE

If anybody wants my excel spreadsheet with the formulas and graphs, you can find it here:
https://people.ucsc.edu/~klee/t…s.xls

Filed under... #AMAZING#Things gamers do