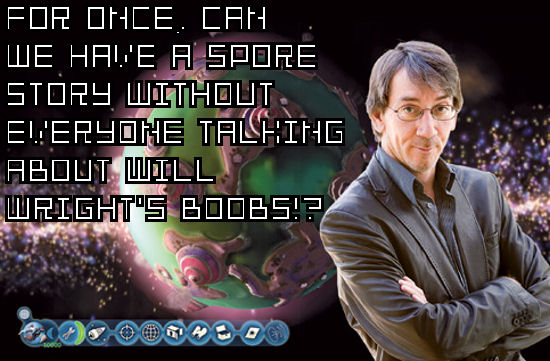 It was just recently that legendary BAFTA winner Will Wright was declaring the Wii a superior platform for development, and it looks like he’s a man of his word as it’s been announced that Spore is coming to that very platform.

For those living under a rock, Spore is an upcoming PC game in which you evolve a species from its tiniest cellular incarnation to an entire space travelling population. Aside from being a game by Wright, the title has generated a lot of excitement for its increasing sense of scale and ambition, as well as the promised customization and the all-important feeling of Godlike power that the player will be imbued with.

“The only next gen system I’ve seen is the Wii–the PS3 and the Xbox 360 feel like better versions of the last, but pretty much the same game with incremental improvement,” explained the icon. “The Wii feels like a major jump — not that the graphics are more powerful, but that it hits a completely different demographic. In some sense I see the Wii as the most significant thing that’s happened, at least on the console side, in quite a while.”

Spore is coming to the PC in Q2 of 2008, Thus far, there has been no further details on a release date for the Wii version, or what changes will be involved. Destructoid shall, of course, keep you posted.

Filed under... #Will Wright