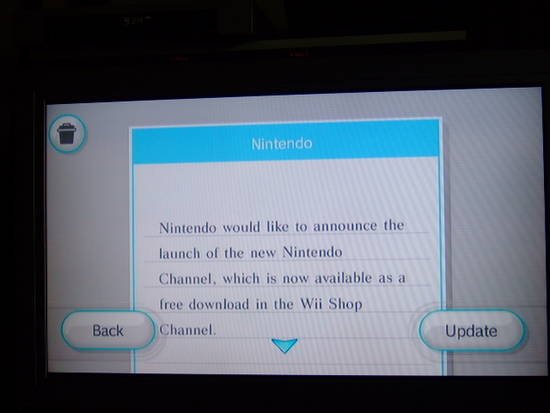 If you find your Wii’s disc slot glowing this morning, don’t worry — it’s just a love letter from Nintendo in the form of the Nintendo Channel! Already available in Japan, this new channel that delivers videos, game information, Nintendo DS demos, and more is now available for download on your Wii.

Word of warning — just because you get a message from Nintendo on your Wii that is accompanied by an “Update” button, don’t think that you can simply click on that and get the content they’re talking about. No, ma’am. That will simply waste a few moments of your life while the Wii looks for a firmware update that doesn’t exist; you’re going to have to go into the Wii Shop Channel to find this new download.

Since you may be stuck at work and might not be home for another eight hours, I went for a spin with the channel this morning on your behalf. Hit the jump for some details.

After the small download (which went surprisingly quickly), the new channel was placed right on the Wii “dashboard” next to my Virtual Console copy of Splatterhouse … which is the perfect place for it. After booting it up and being treated to a few screens telling me a bit about the channel itself, I was asked if I wanted to opt in or out of receiving commercial messages from Nintendo. The novelty of the glowing blue disc slot has worn off, so I’ve opted out; presumably the system will notify you when new demos, video, etc. are available.

Next, the channel decided to launch right into a video, which took ages to load. I stared at spinning bubbles for about three minutes before the streaming picture started to play. It’s simply a promotional video for all things Nintendo — things like WiiWare, Wii Fit, Mario Kart Wii, and the Nintendo DS. 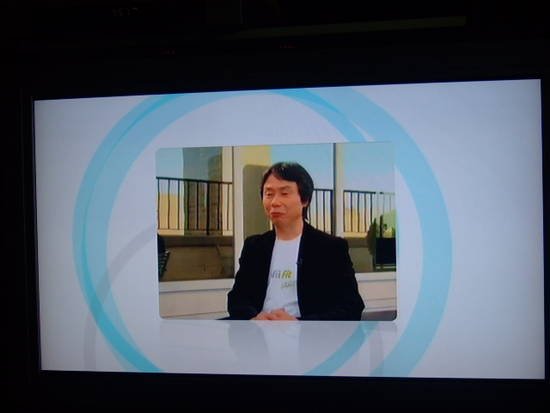 The video quality is serviceable, but leaves much to be desired; think YouTube on your television. On my widescreen set, it only took up a portion of the screen; by clicking on the video, you can enlarge it, but it’s still only displayed in standard 4:3. It should be noted that once the video did start to play, it actually stopped again halfway through, and I had to stare at some more spinning bubbles while I waited for the rest of the video to buffer.

There are already a handful of videos available, but it’s pretty disappointing that there’s nothing “new” here. There are videos introducing WiiWare (“What’s WiiWare?”), an interview with Shigeru Miyamoto about Wii Fit, and promotional videos for a few first- and third-party games.

The Nintendo Channel does have a pretty great feature built into it that will allow you to find information on games for the Wii and Nintendo DS. Sorting through the new releases, I clicked on Electronic Arts’ Boom Blox and brought up a slew of details like its release date, publisher information, and number of players. Videos for the game can also be viewed if any are available. (There were none available for Boom Blox at the time.)

You’re also able to make game recommendations based on any title you’ve played for more than an hour. Clicking on this option, I was greeted by a depressing list of only 20 games. I’ve owned the Wii since launch and I’ve only played 20 games for more than an hour each — I’m not sure what else to say about that. The list of games included both Wii and Virtual Console titles, and I can only assume it will extend to WiiWare titles as well. 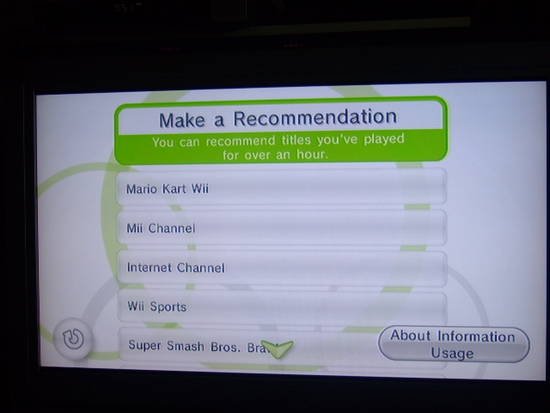 Games are rated based on a number of questions which you’ll answer with the Wii remote. You’ll be asked who enjoyed the game the most based on sex and age, whether or not the game appeals to a casual or hardcore audience, and whether the game is fun alone or with friends. Finally, you’ll be asked to choose — based on a slider — how highly you’d recommend a game; as you pull the slider a little drum roll plays, which is a cute and “very Nintendo” touch. It should be noted that once a game is rated, it’s removed from the list.

Finally, and here’s the part we’ve all been waiting for — the Nintendo Channel will allow you to download Nintendo DS demos! Yes, just like the retail download stations, the games will only stay in your Nintendo DS memory until it’s shut off but … Nintendo DS demos! The following is a list of games currently available on the service: 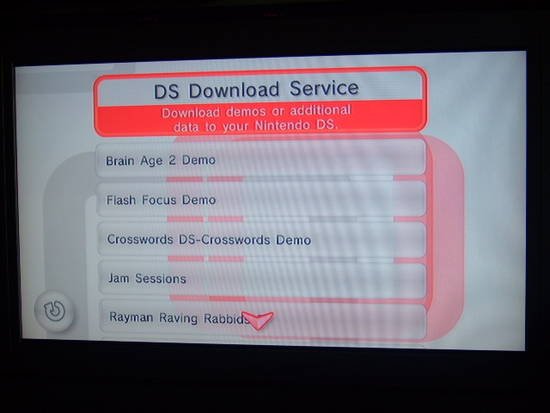 I went ahead and downloaded Raving Rabbids 2, and it was a snap. Once I opened up communication between by Wii and Nintendo DS, the demo downloaded in less than a minute to my handheld.

So there you have it — a short tour of the Nintendo Channel. Some things still leave much to be desired (the poor streaming video quality and slight connection issues, for instance), but there’s a lot of potential here for Nintendo to offer a easy-to-use and rather useful service for Wii owners. Let’s just hope they deliver on that potential.