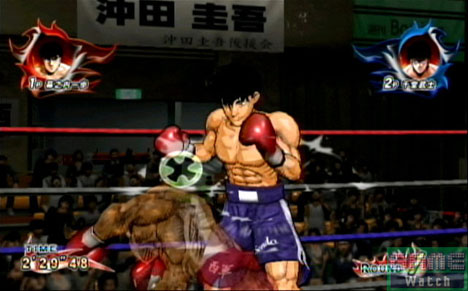 When it first came to light, the idea of Wii boxing made my loins quiver. Regrettably, what looked like a great idea on paper didn’t translate as well as I would have liked when it came to the boxing game found on the Wii Sports pack-in. But you can’t expect too much from a “free” game. So here I am, still waiting patiently for a worthy follow-up to Super Punch Out.

So imagine how fast I had to change my underwear when I saw that Japanese website Impress Watch had some new information on the new Hajime No Ippo (better known to the English speaking world as Victorious Boxers) for the Wii.

Sporting a slick cell shaded style that mirrors the anime/manga it’s based on, Hajime No Ippo will make use of both the Wii remote and the nunchuck to target punches. The various buttons on both controllers will be used to deliver a variety of blows. Additionally, you can float like a butterfly and sting like a bee all over the damned ring using the analog stick found on the nunchuck controller.

Unfortunately, the game appears to only support one player (according to the official site) and there’s no word of a release outside of . Victorious Boxers on the PS2 was not a huge hit outside of (thanks to the anime art style, no recognizable boxers, and the fact that it wasn’t published by EA), so it’s likely that Hajime No Ippo might hit a few roadblocks on its way to the States.

Hear that? That’s me crying all the way to my local importer.