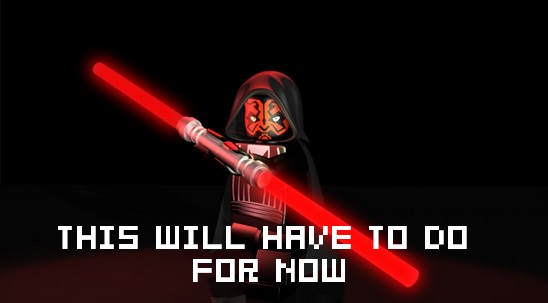 If you remember  just the other week, the Internet was full of chatter regarding the statement from Jim Ward of LucasArts that they were already having a blast with the prototype of a Wii lightsaber game they had a chance to play. If you also recall, we were a bit hesitant to get too excited about it, since we knew they could very well be talking about the upcoming LEGO Star Wars: The Complete Saga game.

Sadly, this looks to be the case. Dashed are the short-term hopes of Star Wars fans everywhere. The LEGO Star Wars games are great, and you’ll never hear me say otherwise. However, saying that we wanted a new Star Wars game a little bit more like what we’ve seen in Force Unleashed, and a little bit less than LEGO Star Wars is one of the great understatements of the century.

This doesn’t mean that such a game isn’t in the works, but it doesn’t look to be soon — unless LucasArts sucker punches us at E3 with something that states otherwise. The good news is that you’ll still be able to waggle that Wiimote and enjoy a little lightsaber action on your Nintendo console. The bad news is that much like when Link from the Zelda games went all cell-shaded on us —  the end product might have ended up great, but we all couldn’t help but wonder about what might’ve been.