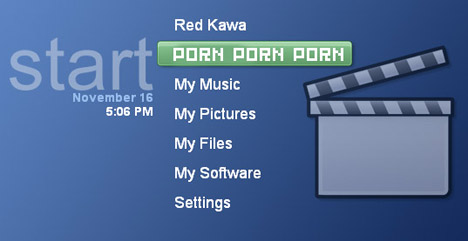 Here’s something you might not know about me, kids — while I’ve had an Xbox for four years, I’ve only ever owned five games for the system, three of which I bought expressly for the purpose of Bargain Bin Laden write-ups. Why? Xbox Media Center, fools! Pumping porn from one end of my house to the other with relative ease simply took priority. Using a home console as a media center has taken front seat with this new generation of hardware for a reason: it rocks. And now with the advent of Wii Media Center X, Nintendo’s little white box can perform similar wonders.

Made possible through the use of the recently released Opera web browser, Wii Media Center X allows your Wii to play a variety of media stored on PCs networked with the system including MP3s, pictures, and even video — provided it’s converted to the right format. Big bonus: WMCX can do it all without a single extraneous storage solution — no SD card required. And for us Xbox Media Center vets, the interface serves as a sleek, simple throwback to what we’ve come to expect from console-based media centers.

Check out the official site where you can download the software, read setup and use tutorials, and donate to the WMCX cause. Early reports say that the software is a little rough around the edges, but shows great promise. When you think about it, implementing a streaming media solution on a network-ready console isn’t all that difficult — take note for future Wii updates, Nintendo. This kind of feature could bring the Wii out of the stone age.