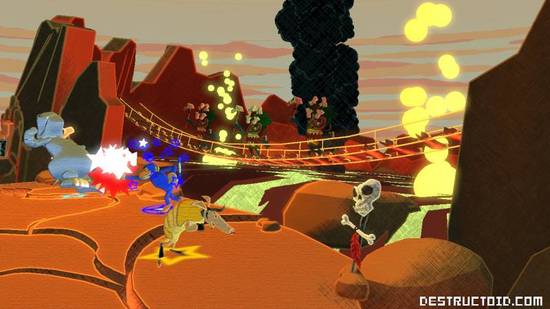 Wideload Games is best known for a few things, the least of which is that the company’s founder, Alex Seropian, was also a founder of Bungie (those are they guys that made Oni, right?). More importantly, Wideload is known for letting players “be the zombie” in the 2005 sleeper, Stubbs the Zombie.

While their upcoming PlayStation 3 and Xbox 360 title, Hail to the Chimp, doesn’t appear to feature a single flesh-eater, the game’s unique aesthetic and “over-the-top” party game angle is certainly appealing.

Taking a political angle, the game begins when the former king of the jungle, the Lion, is disposed as a result of an embarrassing scandal. The rest of the animals (including a hippo, an octopus, and of course, a chimp) attempt to give democracy a chance. In a case of art imitating life, this quickly devolves into a chaotic multiplayer free-for-all, where animals use violence and other devious tactics to turn votes.

Published by Gamecock Media Group, Hail to the Chimp is slated to drop in the Spring of 2008, giving Wideload plenty of time to add some undead animals into the mix.

Cockpit, Austin, Texas – June 22, 2007 – Gamecock Media Group today announced Wideload’s Hail to the Chimp will be released on the Xbox 360™ video game and entertainment system from Microsoft and the PLAYSTATION®3 system in Spring 2008. Jump into the biggest political race the animal kingdom has ever witnessed and battle all competitors head-to-head. Do you have what it takes to be King of the Jungle?

”No one has attempted to bring an over-the-top party game like Hail to the Chimp to next-gen consoles, much less one with biting political satire,” said Rick Stults, Console Chief for Gamecock Media Group. ”Keeping with its reputation, Wideload is going to give gamers something truly original.”

Hail to the Chimp begins after the Lion is deposed as King following a series of embarrassing scandals. The rest of the animals decide it’s time to give democracy a try and hold an election for the next King giving even the lowliest of animals (the Clams) a say in things. The election quickly becomes a chaotic multiplayer free-for-all, with each candidate using a combination of brute force and dirty tricks to turn out the Clam vote. Ten animals will compete to become the next King. During the game, all ten candidates will need to form, and break, alliances with their rivals to gain the upper hand. Multiple game types and hazard-filled arenas keep the action flowing nonstop as the shifting loyalties, truces and vendettas build up to epic proportions.