Details on the surprisingly small team behind this horror game

Rounding out our recent coverage of Zombie Studios’ horror game Daylight, I have a little more from my chat last week with studio creative head Jared Gerritzen and writer Jessica Chobot. With the studio behind Blacklight: Retribution attached to the project, there have been misconceptions about the size of the game’s core team, especially considering that this is an Unreal Engine 4 project. “It’s literally Jessica and about six of my devs working on this,” Gerritzen told Destructoid.

Throughout the interview, the duo stressed that this is truly a passion project. “Everybody’s just really taken it upon themselves to spend their own personal time and effort trying to get it completed — just the fact that it is self-published and we gotta to be super careful with budgets and things,” said Chobot.

“When I first got into the industry,” recalled Gerritzen, “it was standard fare to work insane crunch for no reason. Just for the love of the game. When I came to Zombie seven years ago, I didn’t want that to happen. So we’ve been very diligent making sure our guys don’t work crazy ours, but with this, it went back to old-school. It went back to like guys sleeping under their desks. And it wasn’t because they had to, it was because of the pride.

“This is going to be a game that this core group of guys are very, very proud of doing. It’s really awesome because that kind of reminds me of the old-school days of game development where these game devs were blazing a new trail and they knew how lucky they were.” 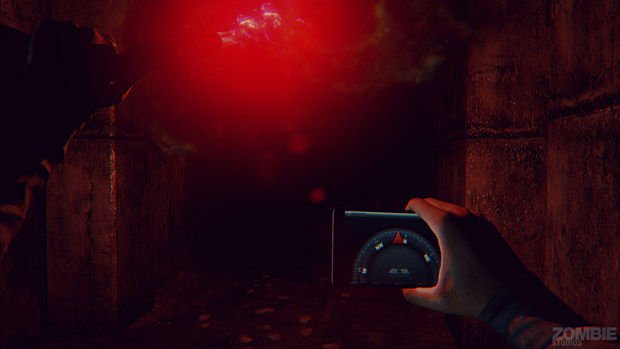 “I think it got confused in some earlier interviews where people are like ‘Oh, the main character is Jessica.’ And that’s not the case,” explained Chobot. “What we were trying to talk about is the main character is whoever you want yourself to be because all you see is a first-person perspective. We do have moments where certain voice-over is done which I did because I’m there and it’s easy and I wrote it, so I know what to do — and it’s just like quick little quips. So that’s about as ‘Jessica’ as it gets.”

Describing what development has been like on Daylight, she said “The funny part of it is I literally had to set up a makeshift VO booth in my living room where I took a microphone and I took all the couch cushions off my couch and surrounded the microphone in it to muffle it … and downloaded this flashlight application on my iPhone so that I could read the lines when I was inside my little cave. And then that was how I recorded everything.”

It seemed funny to me how, of all the teams that could showcase the prowess of Unreal Engine 4 in this transitional period, it’s a handful of people working on Daylight who are among the first.

“The head of licensing still gives me massive shit because we’re going to be coming out quite a bit before any other Unreal 4 game,” laughed Gerritzen. “I saw him last week, and he was like ‘Dude, I don’t believe it’s coming out. I don’t believe it’s going to run.’ And it’s because the engine is so much in its infancy still. [The game is] going to be a beast. You’re going to have to have a good PC to run it.”

When Daylight releases on Steam, it will cost $20 or less. I asked Gerritzen what he thought about other titles in the genre also going after a similar price point.

“I hope that the mentality kind of changes where you actually get what you paid for,” he commented. “There’s been numerous games in the past couple of years that we pay $60 for that really shouldn’t have been 60 bucks. But that’s because it’s either [Xbox Live Arcade] $15 or $60. There’s never been this middle ground.

“I think we’ll see games that might be $45 where we wouldn’t have seen that a while back. When I first started, you needed to have a publisher … now with the digital distribution thing happening, and Steam, and Origin, now people like us can make a game, we can distribute it. The only thing that we’re unable to do, really — I mean if we have the money — is put a commercial or do a big ad campaign connected to it.”

Continuing, he explained that “If [Daylight] is successful, we’re going to do another independent game. I would love to control my own destiny with our games. We could have a publisher that has five games and our game is the marketing person’s least favorite game out of the five because they might be into completely different games. And so, this game doesn’t become as successful just because of one person’s taste. So now if it’s us developing, producing, publishing, it’s really up to us to do as much as we can or can afford.”

Let the record show that the choice to self-publish is exactly that: a choice. “I’ve got a few games that still have publishers and every time that I talk to those guys they’re like ‘Hey, how about we publish Daylight?’ It’s like ‘Nope! I think we’re good. We’re going to do ourselves and just see if it can be successful.’ I love the idea of living and dying by our own sword. It’s one of those things — it’s scary as hell, but it’s going to be fun as hell to see what happens.