Most videogames deal in the epic, the explosive, and the impersonal. SpyParty deals in subtlety, misdirection, and observation. Many multiplayer games ask the player to expend thousands of rounds of ammunition toward the destruction of the player’s enemies; SpyParty gives you only one shot, and you’d better damn well make it count.

On the surface level, SpyParty is a two-player game about a sniper and a spy. The spy’s job is to walk around a party, completing missions without breaking cover. The sniper’s job is to identify the spy, and kill him. It’s the simplest setup imaginable, but I was positively blown away by the game’s depth and nuance after spending an hour with it at GDC.

Hit the jump to find out why it deserves to be on your radar.

(Don’t mind the ugliness of that screenshot; though the basic mechanics are there, SpyParty is still a good two years away from release. Hecker promises that a sizable amount of that dev time will be devoted to making the game look like not-ass.) 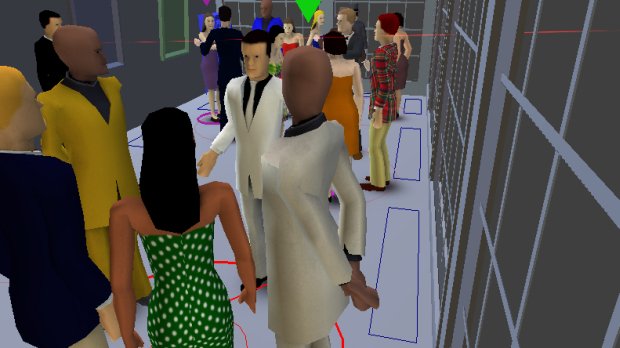 SpyParty isn’t just a game about shooting people and completing objectives. If you want to look at it in the kookiest way possible, it’s actually a game based around the Turing test.

The game takes place in a party, full of about a dozen AI guests. As the spy, your job is to not only complete a bunch of arbitrary objectives (bug the ambassador, meet with a double agent, move a book from one bookcase to another), but to do so while appearing to be an AI guest yourself. If you do anything a bit too human — if you start walking around in circles or choose a weird path to one of your objectives — you run the risk of getting identified by the sniper.

Thus, the experience of controlling a spy is very much like that of being an actor: you try to suss out exactly how an AI character would behave, while also trying to find the right moment to complete your objectives. You’ll find yourself doing totally mission-unrelated things like staring out of windows or talking to other guests solely to keep your cover intact. Every moment of the spy experience drips with tension: did he notice that little stutter in my walk animation as I turned around? Am I standing too close to this bookcase? Oh god, his laser sight is pointed right at my head — does that mean I’m about to die, or is he just testing to see if I flake out and walk away? 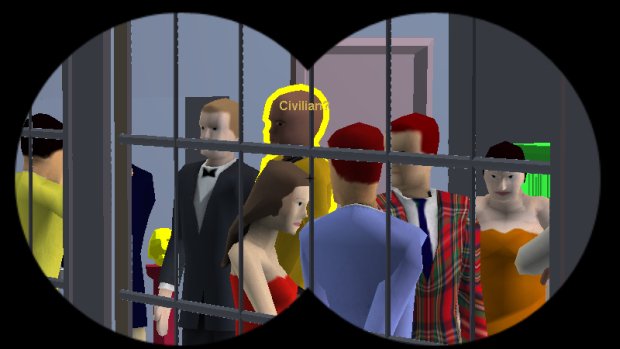 Conversely, the sniper experience is much more about perception and deduction; if playing the spy is like being an actor, then playing the sniper is like being a detective. As the spy can choose as many or as few missions as he wants, the sniper has to be careful with where he focuses his attention. You can spend the entire round focusing on the ambassador so you can watch for someone to bug him, but what if the spy didn’t choose the ambassador mission? What if you try to focus on the entire crowd at once, at the risk of missing the incredibly subtle physical tells that every spy makes when completing a mission? Do you focus on only one or two people, possibly letting the actual spy get away with whatever he wants just outside your field of view?

As the sniper, you have to read the movements and actions of the entire party, narrowing down the number of possible spies until finally firing your sole bullet. If you hit the spy, you win the round. If you waste your bullet, the spy gets away. The sniper experience is one of constant uncertainty, making it that much more satisfying when you win.

SpyParty is as cerebral and personal experience as I’ve ever had with a multiplayer game. The mechanics are so straightforward that, after only a few rounds of play, I was already beginning to metagame. As the sniper, I’d aim my gun at the outside wall of the party, so the spy wouldn’t be able to tell where I was looking and adjust their behavior accordingly. As the spy, I’d constantly try to use other members of the party as cover so that even if I blew my cover, the sniper would still run the risk of shooting the wrong person and losing the round. Between rounds, Hecker told me that one sniper he’d playtested with actually started listening for the clicking of his opponent’s joystick, at which point he’d focus on any of the partygoers who started moving. Noticing this, the spy waited for an AI partygoer to start walking, then flicked the right joystick — the one controlling the camera. Hearing the flick of a joystick and seeing a partygoer suddenly start moving, the sniper aimed, shot, and lost. 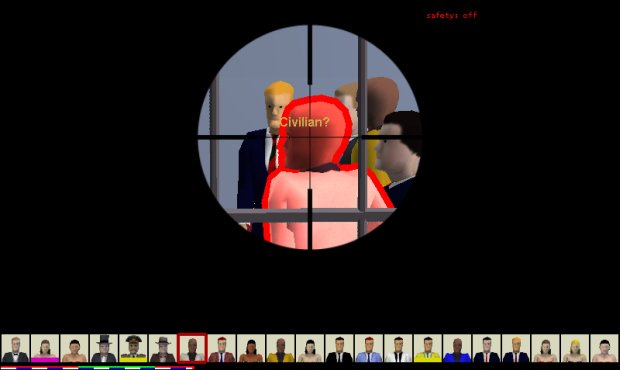 Even in the early build I played with just one map and only four possible spy objectives, no two rounds ever played out the same way. Far as I can tell, SpyParty isn’t a game about memorizing map layouts or nailing an optimum strategy. It’s about improvisation, and reaction, and reading your opponent, and behaving unpredictably. Despite being two years away from completion, the early version I saw still remains one of the most subtle, enjoyable, and surprisingly playful multiplayer games I’ve yet played.