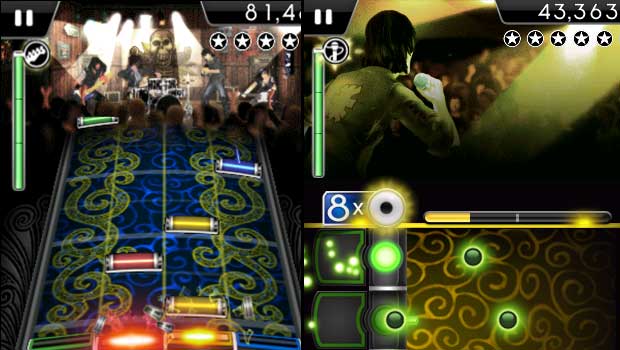 So of course Rock Band is coming to the iPhone (and iPod Touch), right?
This October, you can tap away on Apple’s little touch-screen to 20 songs, with music from Blondie, the Smashing Pumpkins, and more. (You can see that full list after the jump.) You can download more tracks from the in-game Music Store as well, if you’re dying to play Devo songs on your iPhone.
The neat bit is that Rock Band for iPhone supports up to four players via Bluetooth for full band play. Like I said, neat, right? The title also features Facebook connectivity, so you can see your band’s status and invite friends to ditch work and/or socializing and play a videogame with you.
EA didn’t mention anything about the game’s price in the handy fact sheet that was sent out, but if it’s anymore than $9.99, expect Internet riots.