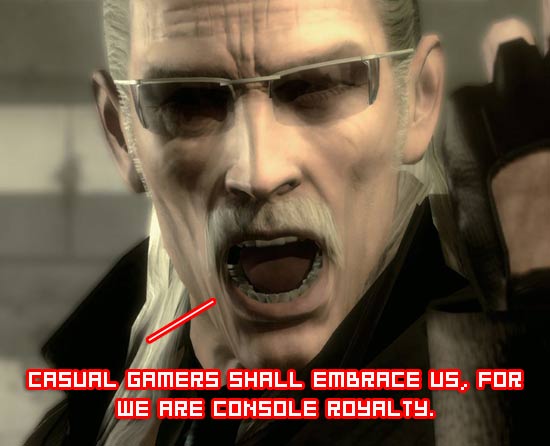 We’re still waiting for the Destructoid crew to phone in the closing comments of their firsthand experience with the Metal Gear Solid 4 demo at the E For All show, but in the meantime the guys at GameAlmighty  (see, even the “Almighty” love us!) were kind enough to share an insightful interview they had with Ryan Payton, who happens to be the man responsible for overseeing the game’s production from start to finish.

Starting with the obvious question, Ryan answered just why the most anticipated demo on Earth hasn’t graced the PlayStation’s download section as of yet. In a nutshell, it’s simply not ready to bear the weight of the public’s scrutiny at this time. In its current build, it would seem more like a series of beta tests than an actual demo. That being said, the good news is that not only was a 15-minute playable demo on the E For All show floor, but that Konami is just as eager as the rest of us to see that public demo become a reality — it’s just going to take a little more time and patience on our part.

Hit the jump for more insight into the next Metal Gear game, and maybe a few surprises (or not).

Moving on to the other questions thrown at him, Ryan expanded on what we can expect from the finished game, and some of the news was quite exciting. Rule number one? There will be no sacred cows with this Metal Gear. That could encompass a lot, but in this case, it means that we can fully expect a revamped control scheme from the previous games in the series. It doesn’t come without some amusing side effects, though:

We’re stripping away different button schemes. For example, all of the actions are based on the triangle button. It’s context sensitive, and that’s new for the series. Also the way that you shoot enemies – that was always a problem with previous Metal Gear games. Because you could do it from top down view, but you would never get a precise shot right? And there was never really a lock-on feature where you can strafe around enemies. So that’s why we’re totally reworking the aiming system and the action. Now it feels so good that we actually have a problem with players playing it like an action game as they would Gears of War or Resident Evil – killing and shooting everything in site, where this really is a sneaking game.

Now on to my favorite part. There’s just something about flashbacks done in a relevant manner that makes a great game even more satisfying. While I find it hard to believe that the majority of gamers aren’t at least semi-versed in the Metal Gear world, this is still a welcomed edition in my book:

One tactic that we’re using is flashback sequences, so when you’re watching cut-scenes there’s going to be an X button icon that appears in the top right hand corner of the screen. For example, whenever a character refers to “Metal Gear Rex,” or “Shadow Moses” players will push that button and they’ll be shown a flashback – maybe with some voice overs of what happened in MGS 1, 2, and 3 to refresh their memory. Or if they haven’t played the games it kind of lets them know what happened in those previous games.

Wrapping up the interview, Ryan wanted to make certain that we know exactly what to expect from the game. Yes the hardcore crowd won’t be left out, but Konami has the mainstream audience in mind. Love it or hate it, it’s just a necessary evil. Hey, it’s worked wonders for Nintendo.

Since I attribute my desire to own a PS3 to this game and a couple other Sony favorites (Ratchet & Clank, Jak and Daxter), I sincerely hope that Konami truly knocks this one out of the ballpark. Sony could use a few more solid hits to fortify its weakened stable, and it never hurts to have a sequel raise the bar for future iterations — much in the way that Resident Evil 4 did on the GameCube. I still firmly believe that Metal Gear 4 will find its way to the Xbox 360 in due time, but who wants to wait for it? I sure don’t.