The other day I was reunited with an old love of my life. It was a glorious, remarkably passionate reunion. One that was as unexpected as it was, well, ridiculously hot.

It all happened in an arcade I was in recently (I know, that’s a sad rarity nowadays). I had just purchased a delicious churro and was walking through the large corridors of the loud, flashing building. Although the arcade had been around for years, all the old cabinets had recently been replaced by all the hot new games: Guitar Hero, Generic Racing Game A, Crazy Epilepsy-Inducing Shooting Game B. It was a depressing site for a retro fan like me.

But, then, all of a sudden, like Atreyu seeing the Childlike Empress for the first time, I saw it. Standing before me was one of my favorite arcade games of all time: Toobin’.

I immediately embraced the cabinet as if it was Brad Nicholson in a tight tank top. I couldn’t control my emotions. I was so happy.

I have decided that more videogames need to replace letters with a sassy apostrophe. It just makes them better! Imagine playing Bi’shock or Shadow o’ the Colossus. It makes the games sound so much more “hip”, right?

But, seriously, Toobin’ is about two guys who ride on inner tubes down long, perilous rivers … and it is named Toobin’. That’s like calling a game about a spy who rides a bunch of elevators Elevatorin’ or a game where you play as a wisecracking pirate Piratin’. (Not that there would be anything wrong with those incredible names.)

The guy who designed this game didn’t bother with some clever play on words or try to make the game sound more exciting with some dramatic name. Nope. He simply called a game with inner tubes in it Toobin’. With two “o”s for some strange reason. And it is so amazing. 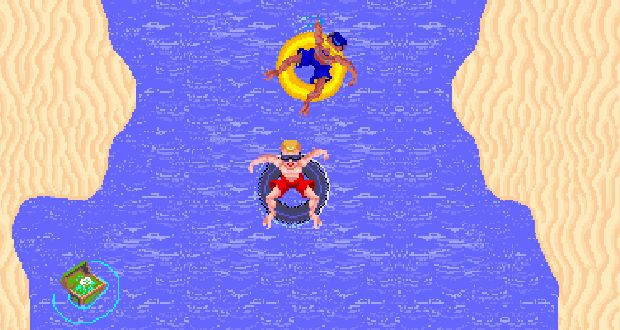 One of Toobin’s biggest selling points is that you can play with two players at the same time. For people not familiar with the game, the concept is simple: Jump on an inner tube (while wearing some radical sunglasses) and control your hip, young characters as they try to safely navigate to the bottom of long, obstacle-filled rivers. Along the way you will run into fallen branches that threaten to pop your inner tube, hungry alligators, and even … giant flaming skulls?!

It’s a simple game, but made totally awesome by its bright color scheme and hilarious ‘80s feel.

And being able to play this with two players simultaneously isn’t just fun because of the added player. The game is hard enough as is (more on that later), but adding a second person is chaos!

Also, you can throw (beer?) cans to slow the other player down. Amazing! 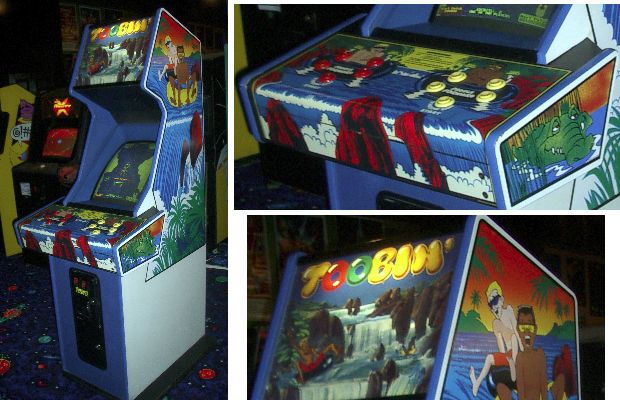 Just look at the art on the cabinet!

Let’s break this artistic masterpiece down for a second.

First, and most obvious, is the ridiculous title graphic. Written in bouncy, colorful letters, the name of the game jumps out to anyone within eye shot of the busy cabinet. Just the way it looks will put a smile on any naysayer’s face. It’s just so wacky! Try saying the name out loud and listen to how funny it sounds.

Now let’s move to the side of the cabinet, where the best parts of the art exist. 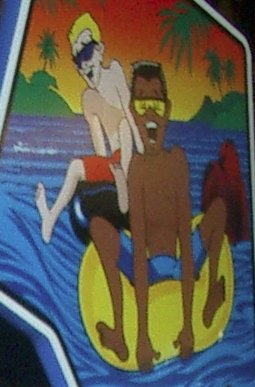 For the record, I have been “toobin’” in real-life many times, and never once have I ever had as much fun as the two main characters look like they are having. I mean, I had a great time, don’t get me wrong, but never did I grab hold of the front of the tube, throw open my legs, and smile so big as if to scare woodland creatures. To be fair, I did pass out in a drunken stupor from relaxing in the sun for hours at a time while journeying down the rivers I went “toobin’” on, but I like to think (and hope) that none of these theatrics ever happened.

But the pièce de résistance of the art has to be the throwaway, easy-to-miss alligator hiding in the bottom left of the cabinet. 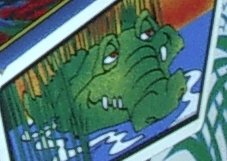 Just look at him. Look at his face. I can’t tell if he is anxiously waiting for our intrepid “toobers” because he wants to eat them when they get to the bottom of the waterfall … or talk to them about who just got kicked off on the last episode of Project Runway.

In my perfect version of Toobin’, it is most definitely the latter.

It has the most pointlessly difficult control scheme in any arcade game ever!

You would think that a game that finds players controlling two guys toobin’ down a river would be controlled with a track ball. For one, they were all the rage in the late ‘80s (Crystal Castles!), but, most importantly, it would have made sense for how the game works.

But, again, the awesome designer who decided to name the game Toobin’ to begin with thought it would be best to feature four buttons at different diagonals that each control one of the inner tube riders’ legs and arms.

Now … as people who have played this game know, the control scheme is terrible. As your inner tube spins and bounces all over the screen, trying to figure out which buttons to press to turn a specific way almost becomes impossible. Throw in all the obstacles you have to dodge and the narrow river pathways you have to navigate and Toobin’ turns into a madcap test of your patience.

But, you know what? This is part of what makes the game so great! Standing next to a friend and furiously pounding on multiple buttons that don’t do what you were hoping for at all always results in maniacal laughs and screams of frustration.

Again, Toobin’ is so amazing that even its biggest weaknesses somehow become its biggest strengths.

You could win a t-shirt after playing!

When Toobin’ was released in 1988 — by collecting all the hidden “TOOBIN” letters scattered throughout the game’s many levels — players could win a free Toobin’ t-shirt. After finding all the letters, this screen would be displayed: 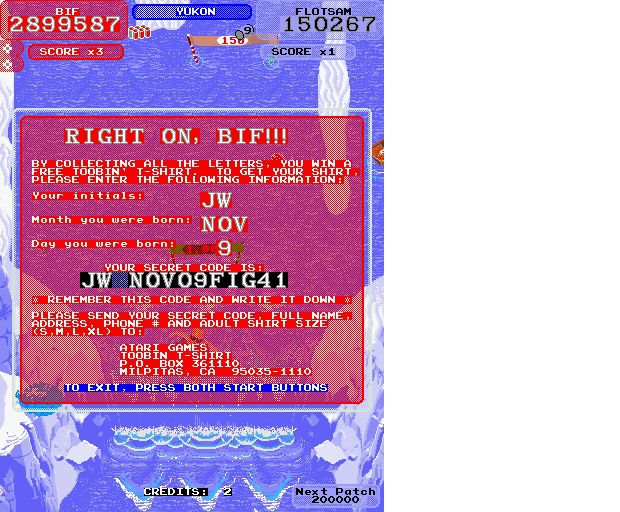 Sadly, I never won one of these coveted t-shirts, but it wasn’t for a lack of trying!

Oh, and for those of you reading that want to track down a Toobin’ arcade machine and try to win one of these awesome t-shirts: Sorry to say, but the contest expired on December 1, 1988.

This video has no real relation to this article, but I just wanted to point out how much I love the guy in it. Also, he shows how the cool moving waterfall effect on the top of the cabinet is done. Which is awesome.

Even though I love this guy, I am horribly jealous that he bought himself a Toobin’ cabinet for only $100.

What do you think? Do you have positive or negative (boo!) memories of this classic arcade game? If you do remember it, what is your favorite/least favorite part about it? Like me, do you miss the wonderful arcade cabinets of yore?

And, most importantly, what is your favorite word to randomly add an apostrophe to?