I’ve spent a lot of time over the past couple of weeks checking out random indie games from Kickstarter, like Mage’s Initiation, and I’ve also been playing a lot of Dwarf Fortress. I started to wonder, “Why doesn’t Dwarf Fortress have a Kickstarter?”

Rather than come up with some crazy speculation of my own, I just decided to ask Tarn Adams, the game’s developer, why he has not yet sought out extra funding.

“A Kickstarter isn’t really in the cards — I’ve kind of been doing a slow-motion Kickstarter for the last seven years,” he said. The game is free to download and play, and all Tarn asks is that players donate if they enjoy it.”People send us however much money they want, we send them rewards and then we keep working.”

While Kickstarter is a great way to showcase what the finished product might be like, “There’s quite a bit of future project information in the development section of our site, so contributors know what to expect more or less.” 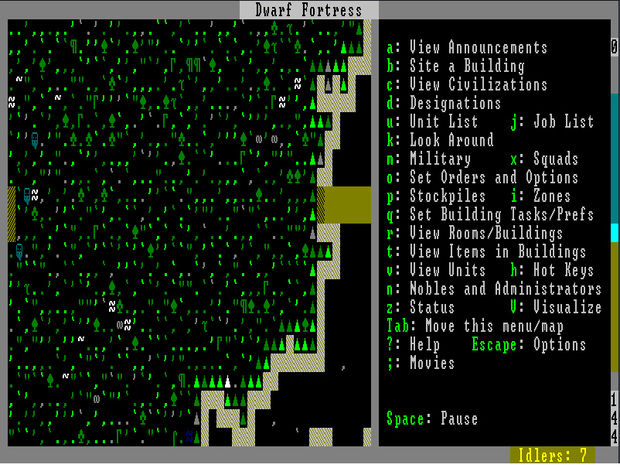 Although the game has come a long way since it launched, there’s still a lot more planned for this dwarfish life sim. “I have a list I’ve been working with for a while that’s settled down, roughly speaking, and we are 34% done with that (that’s where the 0.34 in the version number is from),” Tarn explained. At the current rate of progress, this means we can expect updates for another 14 years at least, which is fine by me.

The only other person working on the project is Tarn’s brother, Zach, and they don’t really want to add more employees. “I’m not sure what I’d do with a sudden cash injection — neither of us want to manage employees. That’s the most significant obstacle.”

If you have any interest in Dwarf Fortress, you should just go ahead and download it since it’s free to play. If the lack of graphics scares you away, try getting “The Lazy Newb Pack” which includes some mods that add basic graphics to the game.