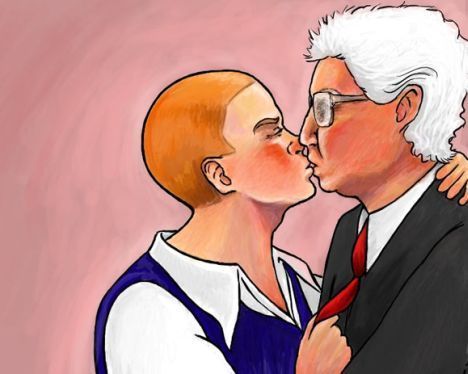 WHAT?! No love/hate for Destructoid? That seems more than a little unfair. We’ve been just as hateful toward him as the other gaming blogs — what gives? Maybe it’s because when Niero met him in Miami, he was unusually kind and professional to him.

Perhaps, as he was scribbling down the names of all those companies he would sue in a moment reminiscent of grade school when he listed all the bullies he would one day emulate take revenge upon, his pen quivered uncertainly as he began to write the “D” in “Destructoid.”

A memory ran through his mind, of a kind man with a laptop and a Latin first name.

“Yanier,”  he whispers to himself. “He was nice to me.” He sniffs, clearing the snot from his nose. “Not like the others.” A single tear rolls down his cheek.

He considers crossing out the “D,” but instead adds a tail, turns it into a “P”, and follows it with “enny Arcade” — Jack Thompson doesn’t cross things out. It’s like admitting you were wrong.

Needless to say, this will probably not go anywhere. Thompson’s trying to take advantage of the Rico act (typically used to take down large organized crime groups like the Mafia) to implicate everyone even peripherally related to video games in some last-ditch effort for glory.

Thompson literally thinks that there is some sort of conspiracy that all the above plaintiffs are engaged in behind doors (Penny Arcade was accused of racketeering, of all things), far from Thompson’s prying eyes.

This won’t work, but damn if it won’t make the DVD for America’s Funniest Court Cases.